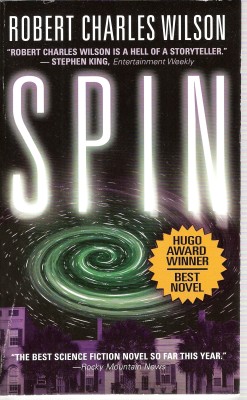 Universal Cable Productions To Produce, Along With Rob Morrow And Leslie Urdang

PASADENA, CA- January 15, 2015- Syfy announced today that Jim Uhls (Fight Club, Semper Fi, Jumper) has signed on to adapt Robert Charles Wilson’s Hugo Award novel, Spin, into a six hour miniseries. The widely acclaimed novel centers on a young scientist trying to save humanity from the impending apocalypse of a mysterious, impenetrable cloud that has enveloped the entire Earth, blacking out the stars.

Spin, originally published in 2005, is the first of a trilogy in the best-selling series that also includes Axis and Vortex.

Bits and Pieces Picture Company produces and develops film/tv/digital content. Currently they are working with The Weinstein Company on a new half hour cable series.

Leslie Urdang and Olympus Pictures are best known for feature work including the Nicole Kidman starrer and Oscar nominated “Rabbit Hole”, the Oscar winning “Beginners,” “Thanks for Sharing” with with Mark Ruffalo, Gwyneth Paltrow, Josh Gad and “Adam” with Hugh Dancy and Rose Byrne. OP’s most recent projects are “Stockholm, PA”, to premiere at Sundance in 2015 starring Saoirse Ronan and the soon to be released “Family Fang” starring Jason Bateman and Nicole Kidman and directed by Bateman. OP has recently started working in television. In addition to “Spin”, it has set up a scripted drama called “Broad Street” at Bravo and an adaptation of the book “Peony”, described as a Downton Abby set in China, to be written and directed by Michael Hoffman.