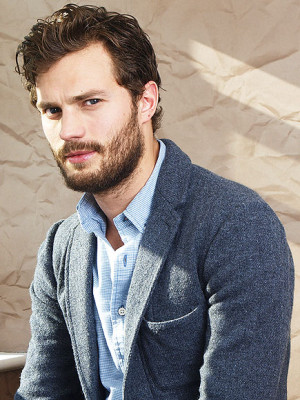 The notoriety of Fifty Shades of Grey is paying off for Jamie Dornan – he’s been cast as the lead in The 9th Life of Louis Drax, the psychological thriller that marks the return of Miramax to the active production of new films.

Based on the best-selling novel by Liz Jensen, the story begins on Louis Drax’s 9th birthday, when he suffers a near-fatal fall. In order to reveal the strange circumstances surrounding the young boy’s accident – Dr. Allan Pascal (Jamie Dornan) is drawn into a thrilling mystery, testing the boundaries of fantasy and reality.

The script was written by Max Minghella and will be directed by Alexandre Aja (Horns). For more, check out the press release after the jump.

LONDON and VANCOUVER, August 27, 2014 – Global film and television studio Miramax today announced the production of the psychological thriller The 9th Life of Louis Drax and has cast Jamie Dornan (Fifty Shades of Grey, The Fall) to star in the film with Alexandre Aja (Horns, The Hills Have Eyes, High Tension) to direct.

Marking his screenwriting debut, Max Minghella has written the feature screenplay based on Liz Jensen’s best-selling novel of the same title. The 9th Life of Louis Drax will be produced by Minghella and Tim Bricknell (The No. 1 Ladies’ Detective Agency, Breaking and Entering) of Antcolony Films, Shawn Williamson (The Interview, 50/50) of Brightlight Pictures and Aja. The film will be executive produced by Rosanne Korenberg (Half Nelson, Hard Candy).

Principal photography will commence this October in Vancouver, Canada. Zanne Devine, Miramax’s Executive Vice President, Production and Development, will oversee the project on behalf of the studio. Sierra/Affinity will serve as the international sales agent.

“Tim and I are thrilled this deeply personal project is being brought to fruition with passion and integrity,” said Minghella. “We look forward to collaborating with Alex and Miramax to create a truly original movie that will captivate and surprise audiences.”

Aja added, “Max’s script takes us on a very emotional journey through the deep recesses of the mind and on a suspenseful Hitchcockian ride. I was drawn to the poignant family drama and the supernatural elements, and am excited to bring this rich and complex story to life.”

Thomas J. Barrack, Jr., Chairman of Miramax, said, “This spectacular psychological thriller will be a classic Miramax production. There is no better storyteller in the industry than Max Minghella and no more talented director than Alexandre Aja. Together, they will weave a unique and masterfully crafted script with the bold and powerful talent of Jamie Dornan and his accompanying cast!”

The story begins on Louis Drax’s 9th birthday, when he suffers a near-fatal fall. In order to reveal the strange circumstances surrounding the young boy’s accident – Dr. Allan Pascal (Jamie Dornan) is drawn into a thrilling mystery, testing the boundaries of fantasy and reality.

After vigorous bidding, the novel was first optioned in 2004 with plans for the film to be adapted and directed by the late Anthony Minghella (The English Patient, The Talented Mr. Ripley).

The 9th Life of Louis Drax is a Canada/UK co-production.

Miramax is a leading worldwide film and television studio with a library of more than 700 motion pictures containing some of the most original and acclaimed independent films, such as Pulp Fiction, Chicago, Good Will Hunting, The English Patient, Life is Beautiful, and City Of God – as well as scores of commercial hits such as Bridget Jones’s Diary and the Scream, Scary Movie and Spy Kids franchises. Collectively, the Miramax library has received 282 Academy Award® nominations and 68 Oscars®, including four Best Picture awards. Miramax’s world-class global distribution team has successfully brought this acclaimed collection of titles to existing and emerging platforms in nearly every country in the world.

Miramax’s new development projects include both TV and film. Currently the studio is working with industry luminaries to create new derivative television series based on their respective award-winning stories and characters. These titles include Gangs of New York with Martin Scorsese and Robert Rodriguez’s From Dusk Till Dawn: The Series, which was recently renewed for a second season. Miramax, together with Sony’s Screen Gems, will release Jeremy Garelick’s film The Wedding Ringer (starring Kevin Hart, Josh Gad and Kaley Cuoco) on January 16, 2015.

Miramax was purchased in 2010 by Qatar Holding, together with the investor group led by Miramax Chairman Thomas J. Barrack, Jr.’s Colony Capital, and is headquartered in Santa Monica, California with an office in London.

Antcolony Films was incorporated in the U.K. in 2008 by Max Minghella and Timothy Bricknell. Born from the legacy of Mirage, the production company run by Sydney Pollack and Anthony Minghella, Tim and Max have gone on to produce a variety of work including HBO’s The No. 1 Ladies Detective Agency, Channel 4’s The Fear, BAFTA winner Eric & Ernie and, most recently, Hossein Amini’s directorial debut The Two Faces of January.

Sierra/Affinity is a leading independent film finance, production and foreign sales company, consistently delivering high-quality, commercially viable feature films for a global audience. Led by Nick Meyer and Marc Schaberg, Sierra/Affinity capitalizes on the ever-evolving global film marketplace, representing sales of third-party films as well as its own productions designed to appeal to both the North American and global marketplaces. In addition to representing sales of third party films, the company acts as the exclusive sales agent for films developed and produced by Sidney Kimmel Entertainment, OddLot Entertainment, Bold Films and Sierra Pictures and its partner, Incentive Filmed Entertainment. In October 2012, Sierra/Affinity leveraged its international film and distribution capabilities to enter into a partnership with leading global TV program distributor Engine Entertainment to jointly launch Sierra/Engine Television designed to globally distribute television productions.