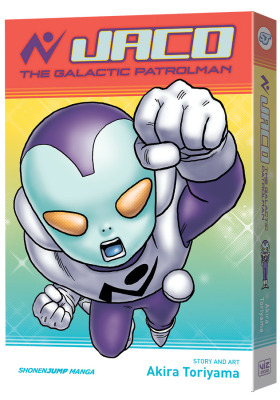 From The Creator Of DRAGON BALL This Hilarious Manga About An Unlikely Friendship Between A Clumsy Interstellar Cop And A Hermit Scientist Debuts In Print And Digital!

San Francisco, CA, December 17, 2014 – VIZ Media, LLC (VIZ Media), the largest distributor and licensor of manga and anime in North America, prepares to thrill manga (graphic novel) readers and fans of legendary creator Akira Toriyama with the launch of JACO THE GALACTIC PATROLMAN in print and digital on January 6th.

The complete-in-one-volume interstellar comedy will be published under the company’s Shonen Jump imprint. JACO THE GALACTIC PATROLMAN is rated ‘A’ for All Ages and will carry a print MSRP of $9.99 U.S. / $12.99 CAN.

Manga legend and creator of DRAGON BALL Z, Akira Toriyama, is back with the quirky comedy JACO THE GALACTIC PATROLMAN! Retired scientist Omori lives alone on a deserted island while continuing his research into time-travel. His quiet life is interrupted when galactic patrolman Jaco crash-lands and decides to move in with him. This agent from space claims to be elite, but sometimes it can be a little hard to believe. Can Jaco get along with the old man long enough to save the earth from a dangerous threat?

“JACO THE GALACTIC PATROLMAN is Akira Toriyama’s first new release in over a decade and notably features some must-read DRAGON BALL Z content related to the parents of Goku, the hero of his other bestselling manga series,” says Alexis Kirsch, Editor. “Jaco is an alien who is very proud, but also extremely clumsy. Together with the reclusive scientist, Omori, and Tights, a mysterious girl that dreams of becoming a sci-fi novelist, the stage is set for fun and zany adventures. Readers of all ages won’t want to miss this fun new series by one of the greatest names in manga!”

Renowned worldwide for his playful, innovative storytelling and humorous, distinctive art style, Akira Toriyama burst onto the manga scene in 1980 with the wildly popular title, DR. SLUMP. His breakthrough hit series DRAGON BALL (published in the U.S. as Dragon Ball and Dragon Ball Z) ran from 1984 to 1995 in Shueisha’s Weekly Shonen Jump magazine. Toriyama is also known for his design work on video games such as Dragon Quest, Chrono Trigger, Tobal No. 1, and Blue Dragon. His other manga works include COWA!, Kajika, Sand Land, Neko Majin, and a children’s book, Toccio the Angel. VIZ Media publishes an array of Akira Toriyama’s work in English including DR. SLUMP, DRAGON BALL / DRAGON BALL Z, COWA! And SAND LAND.

For more information on JACO THE GALACTIC PATROLMAN or other manga titles published by VIZ Media, please visit www.VIZ.com.