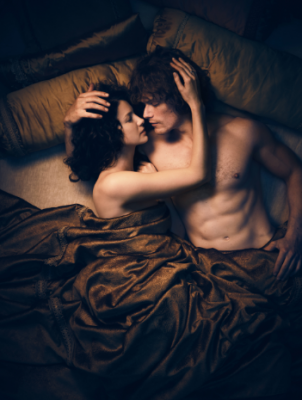 After a long hiatus and five episodes filled with monumental (and sometimes heartrending twist), Claire and Jamie will – at long last – be reunited.

The sixth episode of Outlander’s third season, A. Malcolm, Claire and Jamie are finally together again – but, of course, there are obstacles to be overcome.

Beginning at 5pm(4C), October 15th, Starz will marathon the first five episodes of season three – then, on October 22nd (8/7C), the supersized sixth episode of  Outlander will reunite its lovers. Check out the teaser below.

Beverly Hills, Calif. – October 9, 2017 – Starz announced today that the eagerly-awaited reunion episode from “Outlander” Season Three will air on Sunday, October 22nd at 8PM ET/PT as a special, extended 74-minute episode. The epic, sixth episode will be the first time fans get to see beloved characters “Claire” and “Jamie” together again, after being separated for 20 years.

Starz also released an intimate first-look image (attached) from “Claire” and “Jamie’s” reunion scene, as well as a teaser video (links above) featuring never-before-seen footage from the upcoming sixth episode.

Ahead of the new episode, Starz will air a marathon of the first five episodes of Season Three beginning Sunday, October 15th at 5PM ET/PT, giving viewers the chance to re-experience the season thus far, as fans await the reunion.

After decades apart, Jamie and Claire finally reunite and rekindle their emotional and physical bonds. But Jamie’s new business dealings jeopardize the couples’ hopes for a simple life together.

The third season of “Outlander” picks up right after Claire (Caitriona Balfe) travels through the stones to return to her life in 1948. Now pregnant with Jamie’s (Sam Heughan) child, she struggles with the fallout of her sudden reappearance and its effect on her marriage to her first husband, Frank (Tobias Menzies). Meanwhile, in the 18th century, Jamie suffers from the aftermath of his doomed last stand at the historic battle of Culloden, as well as the loss of Claire. As the years pass, Jamie and Claire attempt to make a life apart from one another, each haunted by the memory of their lost love. The budding possibility that Claire can return to Jamie in the past breathes new hope into Claire’s heart… as well as new doubt. Separated by continents and centuries, Claire and Jamie must find their way back to each other. As always, adversity, mystery, and adventure await them on the path to reunion. And the question remains: When they find each other, will they be the same people who parted at the standing stones, all those years ago?