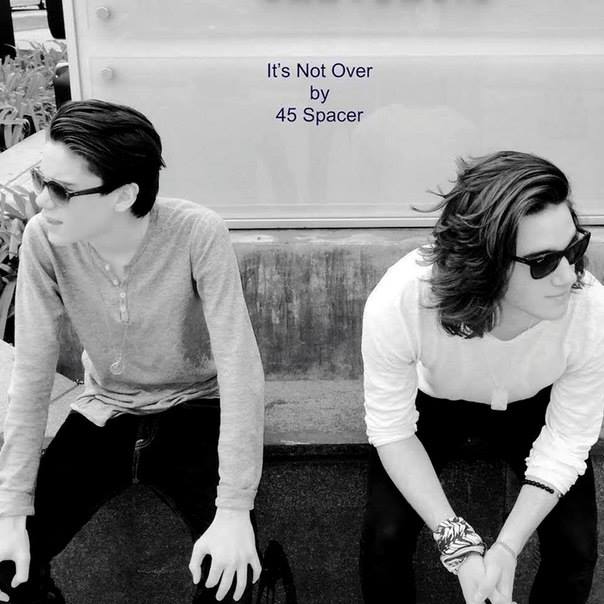 How did you guys get your start?

Jack Di Blasio: We’re 45 Spacer – two brothers who started playing what…5-6 years ago? He was in elementary school and I was in high school and we had a talent show actually and we wanted to do something sweet so we said let’s play “Sway” by the Kooks and that’s what we did and that’s how we started playing together.

Pat Di Blasio: Just jammin’ in the garage and stuff like that. My dad recorded us playing covers…

Jack: Shaky video cameras and all that.

I know what an actual 45 RPM adapter is lol. What made you choose 45 Spacer for the name of your band?

Jack: We chose 45 Spacer because we needed a band name that felt like the best fit.

You got started when you were really young but then your career started to take off once Lana (Parrilla) backed you up.

Jack: I would say yeah. Once she tweeted out about us definitely. My dad and Lana started seeing each other when I was in grade ten so I guess that was three years ago. Pat and I were playing and she liked it I think, I hope, and then she tweeted about us and that’s how a lot of people heard about us. She was really important.

How did the first song come about?

Jack: Well we were in the basement and I had that riff going and Pat was playing the drums and we listened to a couple bands and we were inspired and we started singing about that first line “You’re lost in a broken town, a Queen without a crown” that came out and we were like lets just build a song around Once Upon a Time and Lana’s character.

So how has the experience with the fans been since that initial song?

Jack: (directed to pat) What would you say?

Jack: It’s very relatable to many people and so I think they changed and they got closer to us and they liked what we were talking about in that song. Then we started singing about some new stuff in some other songs and hopefully they like those too.

Listening to the new songs I think you are really starting to find your sound. You’re a young band that’s shown a great deal of growth in such a short amount of time.

How do you think from the debut of your first song “The Last Thing You’ll Do” to your current tracks “It’s Not Over” and “Never Put Your Heart in a Head Case” have things progressed?

Jack: I think there’s been a big step up lyrically. I think we’re kinda playing more with sounds and different colors I would say. We’re writing about more personal things I think, personal growth and love and sex and all that stuff. I think that’s how it’s changing and evolved since “The Last Thing You’ll Do”.

A little more grown up?

Jack: Yeah a little more grown up I would say.

Are the two of you writing the music and lyrics? Are you collaborating with anyone?

Jack: Yeah it’s Pat and I and we’ll write then sometimes we’ll send some stuff to Dave (Muselman) and he’ll help us out or he’ll write a song with us too.

He’ll (Dave Muselman) contribute but it’s mostly the two of you coming up with everything?

Jack: Yes. Mostly it’s Pat and I. We’re the creative part of it and he’ll come in and produce it.

Is 45 Spacer more of a passion project for guys, something you’re trying to figure out along the way and have other interests you want to pursue or do you think this is it, this is your path?

Jack: This is the only thing we’re good at! (hard laughter)

Pat: This is it. I suck at everything else! There’s no other choice!

This is your only option? (hard laughter)

Jack: Just bang out songs and hit the drums. Yeah that’s our thing.

You have a couple new tracks. Are you working on a full album?

Pat: We’re creating one. In the basement jammin’.

You have a basement studio?

Pat: Kind of…yeah we do I guess. We have a whole jam space.

Pat: We write all our stuff on there lately.

Have you thought at all about documenting this process? Not that I’m comparing you to Nirvana but now we’re seeing more of that happening and when you see the early days of bands like Nirvana coming out with their new documentary. It’s fascinating to see how a young bands struggle to make it.

Jack: Montage of Heck? It was amazing, killer.

Yes! It was a fantastic peek into that period of time and their world. But now we’re in such a tech driven age with Twitter and Snapchat and Periscope, do you ever think about documenting your experience?

Jack: I would say it’s more documented through the songs. When we started out we have some songs that I hear them and I can’t believe I wrote this.

Jack: Yeah some of them are just no good. But I would say that’s the biggest way we document. I wouldn’t say we go and video tape. We post a Vine or two but I wouldn’t say we do too much which we should probably start doing which could be cool.

Pat: Yeah I’m not good at that stuff.

Don’t you have a younger brother?

Well get him to do it!

Get him, that’ll be his gig. He has no choice he’s the little brother.

Jack: Yeah he’ll sell merchandise and follow us around with cameras.

Do you have any gigs coming up? Any hopes of touring in Vancouver or the U.S.?

Jack: Not really any tour plans yet. We’re trying to build a set right now were we can play our music only so we haven’t started thinking about touring yet. We have shows coming up this summer for sure but we haven’t organized a tour. This summer we have a couple new songs in the works right now so when we finish those up we’ll probably start talking about that.

Your overall experience from day one playing together as little kids until now?

Pat: It’s just fun! It’s always a good time. It’s an escape you know. It’s like you’re on this big wave and nothing can come into your mind except what you’re doing in that moment. I think that’s one of the most important things. It brings peace to your mind. I think that’s the coolest part of it.

I say a big thanks to Lana. I think she’s contributed a great help and that’s amazing and my dad, one of the best men in the world. I love that guy. He’s helped us out so much. What do you think? (directed to Jack)

Jack: I would say Pat’s on time more. (hard laughs) And I can actually play the guitar and we write cool now. I think that’s what’s changed the most.

Pat: When you’re a kid you just don’t know what you’re doing you’re just trying and testing stuff out.

Jack: It’s still the same energy though; it comes from the same place. That hasn’t changed. We’re doing it for fun and we love doing it. It’s not contrived or anything. The only thing that’s changed is we’re progressing and getting older and seeing new elements of the world and we’re incorporating that into our music.