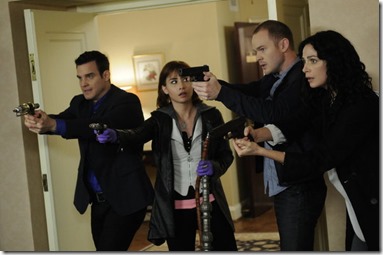 Have you ever watched a TV show and wondered why on earth did that character do that? Well, Syfy is giving fans of Warehouse 13 a chance to interact with the characters from its hit series Warehouse 13 (Mondays, 10/9C) as each new episode unreels. So now you can find out what the W13 team is really thinking, via Twitter, as they set out to snag, bag and tag all those dangerous Artifacts.

For details, follow the tag to the official press release – and then prepare to find out what Artie, Claudia, Myka, Pete and Steve are really thinking on those hazardous missions.

GET THE INSIDE SCOOP FROM PETE, MYKA, CLAUDIA, ARTIE AND STEVE VIA WEEKLY LIVE TWEETS AS THE STORY UNFOLDS ON-AIR

New York, NY – May 3, 2013 — For fans who’ve ever wondered what the agents of Warehouse 13 are really thinking during their weekly adventures to snag, bag and tag the world’s charmed Artifacts, Syfy is turning over its Twitter handle – @Syfy – to the characters from the show where they can interact with fans, answer questions and share some personal commentary about the mission at hand. Each Monday night during premiere broadcasts, fans joining the Live Tweet with a Warehouse 13 team member are privy to some character insights and bonus content.

Pete Lattimer kicked off the new W13 character Live Tweets with the Monday, April 29th mid-season return of Warehouse 13 with 10 all-new episodes. The night delivered a series high in Twitter activity (18K exposures) with #Warehouse13 trending on Twitter boosted by Tweets from Pete from the @Syfy Twitter handle. This was Syfy’s third highest season premiere day ever in Twitter activity.

"We have the absolute BEST fans!  They love the show as much as we do, so we wanted to give them something above and beyond the usual extras" says Warehouse 13 showrunner, Jack Kenny.  "Now they can have fun with Pete practically one-on-one, and go behind the scenes like never before.  And hopefully have some laughs with us!"

Pete will return again this week, Monday, May 6 at 10PM ET/PT, with additional characters to come in subsequent weeks. For some episodes fans may get to vote for the character with whom they’d most like to Tweet. The schedule will be updated weekly on Syfy’s official Warehouse 13 Facebook fan page and Syfy.com/Warehouse13.

Photo by Steve Wilkie/Courtesy of Syfy