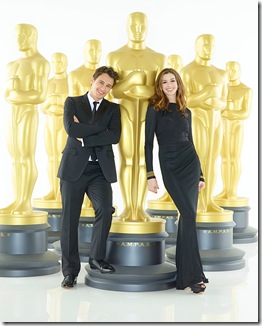 Once again it’s the big dance – The Academy Awards [ABC, 8/7C]. Hundreds of movies have been screened and the alleged best of the best have been selected for quality of production, design, performance, direction and all that good stuff. Box office is up – because of 3D surcharges and increased IMAX presence, while the number of bums in seats has decreased noticeably. Questions arise, yet again, as to whether the quality of films has dropped, overall and the Academy Awards are looked to as an indication of that.

Are you sitting comfortably? Then we’ll begin.

There are no duds here, but there’s not much adventurousness, either. Where are Scott Pilgrim vs. The World, or Let Me In? Both are masterful interpretations of original material that is different, even unique. These are films that took chances and succeeded brilliantly. Either could replace titles from this list and it wouldn’t suffer, quality-wise.

Of the final five, I have to pick The Social Network as my choice to win the Oscar because, a) it is film about character and innovation, filmed as if it were a thriller, and b) it is compellingly propulsive.

Mike Leigh doesn’t actually write screenplays, but his films are always intriguing because they are all about character – frequently to the exclusion of plot as in Another Year. The five writers who combined to create the screenplay for The Fighter avoided writing just another boxing movie by exploring their fighter’s dysfunctional family as much as the actual boxing. Lisa Cholodenko and Stuart Blumberg took a family drama into new territory by using a same-sex couple to tell a very traditional story – thereby upending all expectations. David Seidler told a simple story of a man who had to overcome a handicap to his job – that the man was the King of England and the handicap was stammering actually made the movie more relatable. The most original original screenplay of the year, though, was Christopher Nolan’s Inception, a film that explored identity, the nature of dreams and lengths to which someone will go to be reunited with his family cleverly disguised as a big budget, effects laden summer popcorn movie.

For me, it’s between polar opposites Inception and The King’s Speech, but I’d choose Inception because it takes bigger chances and plays with conventions in a genuinely inventive way.

There is no doubt that these three movies are brilliant. The only reason The Illusionist didn‘t make my Favorite Fifteen is that I didn’t see it until last weekend. Now that I’ve seen all three, I once again find myself torn between two nominees. While How To Train Your Dragon was great fun, both Toy Story 3 and The Illusionist are stronger films both in terms of character and drama and in terms of the development of themes – not to mention that are both very funny, too, in their very different ways.

In the end, though, I have to go with the more bombastic Toy Story 3 because, under the surface, it is as delicately nuanced and intimate as The Illusionist. It is simply the better film.

Outside of Hailee Steinfeld being the female lead in True Grit, I actually have no complaints, whatsoever, in this category. I expect Melissa Leo to win here, but I think the two best performances here are Steinfeld and Weaver. I would choose Steinfeld because, frankly, True Grit required a lot more from here than Animal Kingdom required of Weaver. I would happy if either of them won, but I can’t see that happening.

While John Hawkes is excellent in Winter’s Bone, I think Andrew Garfield provided the soul of The Social Network and was robbed, here. Jeremy Renner’s role in The Town was showy, but pretty one-note. Richard Jenkins’ turn as servant/friend of Abby in Let Me In would have been a better selection in this category.

While everyone expects the Oscar® is Christian Bale’s to lose, I’d prefer to see Geoffrey rush take home the golden boy. He makes you believe that a commoner could become the lifelong best friend of a British monarch.

Here’s another category where I have absolutely no quibbles with the nominees. While it’s too bad that Black Swan lets down Natalie Portman with a telegraphed, anti-climactic finale, she’s brilliant throughout. Jennifer Lawrence is the main reason Winter’s Bone has its nominations and she gives a tour-de-force performance. Williams and Kidman are also absolutely stellar, and Annette Bening could have been replaced by Julianne Moore without the category suffering [they are both superb]. Chloe Grace Moretz did a good enough job in Let Me In that she could have made this list, too.

For me, it seems likely that Portman will win and, while I have no problem with that, I would prefer to see Lawrence with the Oscar® after this is all over.

The Best Actor category is another one that’s deep in quality, though I wouldn’t have minded seeing Kodi Smit-McPhee nominated for Let Me In. Maybe the Academy doesn’t think there should be more than one nominee under the age of sixteen. Personally, I thought he gave a better performance than James Franco, or Jesse Eisenberg – and they were pretty amazing.

Javier Bardem seems incapable of giving a bad performance and Jeff Bridges took an iconic John Wayne role and made his own. Which leaves Colin Firth, whom conventional wisdom says will win.

Me, too. Firth takes a stammering, insecure prince through a completely believable journey to the king who inspired the British during World War II – through his frequently brilliant speeches – and he makes it look easy.

Either Let Me In’s Matt Reeves and Scott Pilgrim’s Edgar Wright could easily replaced someone on this list and I would have been impressed with the Academy’s willingness to think outside the box, plus two of the films on this list didn’t finish in my Favorite Fifteen. The big omission, though, is Christopher Nolan. Such is life.

Of the actual nominations, then, I find myself looking at Tom Hooper and David Fincher as frontrunners. That being the case, I have to go with Fincher. The man turned the story of the people who created Facebook into a thriller – without sacrificing character, drama, or humor. He took a spectacular script and turned it into a brilliant film.

Personally, I don’t think Black Swan, The Fighter, 127 Hours, The Kids Are All Right, or Winter’s Bone belong on this list. The rest were among the top seven on my Favorite Fifteen list. Of those five, two were listed as 1a and 1c [1b was the woefully underrated by most everyone else Scott Pilgrim vs. The World].

I won’t feel terrible if The King’s Speech fulfills expectations and gets the Oscar®, but I’d go with Inception. I certainly didn’t enjoy any film more – nor did I see any film that worked as many levels. While it’s not likely to happen, it wouldn’t be the first time a film won Best Picture without also winning Best Director.

There’s you have it – my list of choices for the 83rd Academy Awards. All that’s left is to get the popcorn and pop and settle in. Okay, James Franco and Anne Hathaway – you’re on!