John Smith [Alex Pettyfer] is one of nine survivors [all children] of the destruction of the planet Lorien [either the writers of the novel are big Tolkien fans, or Lord of the rings has an intergalactic fan following]. They were sent to Earth to hide from the Mogladorians – the aliens who destroyed Lorien – and grow into abilities that would enable them to rid the universe of the Mogladorian blight. Each had a warrior/protector/surrogate father to train them and keep them safe until they were mature enough to meet their destinies.

The film opens with a concise outlining of the above – and the deaths of the first three of the nine. That death of Number Three occurs while the soon-to-become John Smith is swimming with a beautiful girl at a beach party. A burst of light pours from a tattoo on his leg and he sees the death of Number Three while also freaking out the girl. Simultaneously, another Lorienite, a girl, is destroying her home by burning it to the ground – and walking through the flames unscathed.

Upon his arrival at home, following the episode, his protector, Henri [Timothy Olyphant], has them packed up and off to a new location, a small town called Paradise – where the newly-christened John persuades Henri to let him attend high school. In about as much time as it takes to tell, John has stood up to the school’s star quarterback/Sheriff’s son/general bully, Mark [Jake Abel], befriended the school geek, Sam [Callan McAuliffe], and fallen in love with the beautiful yet ostracized Sarah [Dianna Agron].

Despite Henri’s efforts to erase John presence from the internet, a video of the beach party incident is overlooked, giving the Mogladorians a place to begin their search for him. In the meantime, a curious beagle has found its way into John’s life [he names Bernie Kosar after the football star – though Henri has to tell him who that was] and discovers the joys of a real family when Sarah invites him to dinner after an evening at the town’s annual fair.

Things are all lovely – aside from the teen angst, John’s failure to blend in and the curious connection Henri has to Sam’s missing father – until the Mogladorians arrive. Then D.J. Caruso’s entertaining teen flick turns into Michael Bay’s overkill action lollapalooza. Enter Number Six [Teresa Palmer], who has found John the same way the Mogladorians did. 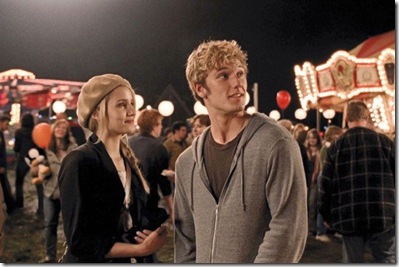 Almost the entire third act is fights, shooting and explosions. Although there is some stunt work, the bulk of the act is also computer generated. Subtle it is not. In fact, as character driven as the first two acts are, the third act is exactly the opposite. It’s like the last act is welded onto the first two acts of a completely different movie.

Aside from the blunt spot welding job, I Am Number Four is also hindered by a lack of chemistry between Pettyfer and Agron. Since Lorienites fall in love only once – and therefore, permanently – it’s hard to buy into the John/Sarah romance. Making things worse, on that level, is the fact that Pettyfer and Palmer practically sizzle together.

Henri John’s protector is another blunt object in a film that veers between nuance and bludgeon – so it doesn’t help that Olyphant, who is so brilliant on the FX series Justifed, is under-utilized as the one-dimensional Henri. His screen presence imbues the character with a cold intensity, but other than that, Henri is a complete cipher.

Even with the lack of chemistry between Pettyfer and Agron, and the lack of dimension to Henri, the first two acts of I Am Number Four are interesting and entertaining. Even the third act, though it feels like a totally different movie, is well done and intermittently entertaining [and it gives Kevin Durand a chance to really ham it up as the Mogladorian commander]. The problem is that the whole is a good deal less than the sum of its parts.

Even so, there is a brief epilog that sets up a sequel. If the film makes money, there will be a chance to get it right next time.