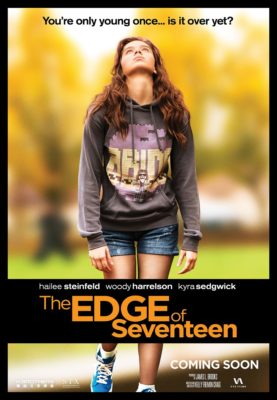 The Edge of Seventeen is for those of us who break into great gouts of galloping, gasping, full-throated laughter when anyone says anything as crass as ‘they’re the best years of your life’ in regard to high school.

We remember the battle to maintain equilibrium as our adolescent selves were flooded with the hormones and growth spurts and acne and all the thousand other misfortunes teenagers (of both sexes) are heir to.

In The Edge of Seventeen, Hailee Steinfeld’s Nadine is a classic example of what we remember high school to have been. The first trailer captures that feeling that so few of us will admit to remembering – check it our after the break – but be warned, it’s a red band trailer so it’s painfully, hysterically accurate. The Edge of Seventeen opens on September 30th.

THE EDGE OF SEVENTEEN – In Theatres September 30th

From producer James L. Brooks, and writer and first-time director Kelly Fremon Craig, comes a wry coming-of-age comedy with a refreshingly authentic voice. Nadine (Hailee Steinfeld) and Krista are inseparable best friends attempting to navigate high school together…until Nadine discovers her older brother and Krista have been secretly dating behind her back. They soon realize that there is a fine line between best friends and worst enemies.

The cast of the film is rounded out with Kyra Sedgwick, who plays Nadine’s well-meaning but completely ineffective mother, and Woody Harrelson, who plays Mr. Bruner, Nadine’s English teacher (and mentor) who is uncannily wise in the ways of girl-clashes.