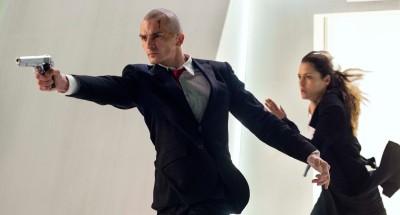 Hitman: Agent 47 is the second attempt to kickstart a franchise based on the Hitman video game. While it’s a fun effort, though far more sizzle than steak, it just isn’t going to start much of anything (please ignore the tag…).

Agent 47 (Rupert Friend) is on a mission – coming after Katia (Hannah Ware) – but John smith (Zachary Quinto) steps in to spirit her away. It seems there are two factions that want to find her father – the man who developed the Agent Program – and they think she might know how to find him.

Soon we learn that Smith (if that’s really his name) is acting on behalf of Antoine Le Clerc (Thomas Kretschman), while 47 has something else in mind. Before long, the tables are turned on Smith and 47 takes Katia away. Katia, it seems, has been so hard to find because she has some serious skills.

Once the preliminary action sequences are dispensed with and we have a different idea about whose after whom for what reason, Hitman: Agent 47 becomes little more than a number of set pieces to showcase what super-soldier 47, Katia and John Smith can really do.

The plot, simple as it is, exists as a frame on which to hang fun action sequences. There’s nothing her that’s going to challenge Mission: Impossible or Fast & the Furious, but there are sufficient moments of originality to hold one’s attention and sub-vocalize a few ‘That’s gonna leave a mark’s.

At 96 minutes, Hitman: Agent 47 zips by and Friend, Ware and Quinto give us just enough character to keep the film from being a by-the-numbers write-off. Ciarin Hinds holds the screen effectively as Katia’s father, giving the movie just a bit of real substance.

Otherwise, this is just a fun diversion. Not that there’s anything wrong with that.