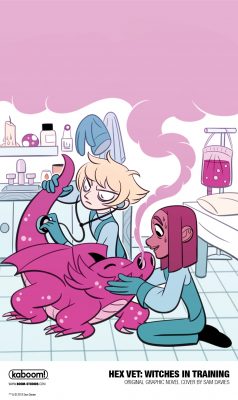 In a world where magic is a part of daily life, even veterinarians have to have some kind of specialized training to deal with magical beasts – like pet dragons…

Nan and Clarion are determined to be the best veterinarian witches of all time but will soon realize that they have a lot to learn.

Hex Vex is a hardcover graphic novel by Sam Davies (Stutterhug) that will be published under BOOM! Studios’ KaBOOM imprint in December.

“Hex Vet” Is Just What The (Supernatural) Doctor Ordered!

Discover The Magic Behind The Medicine a BOOM! Studios in December 2018

LOS ANGELES, CA (May 1, 2018) – BOOM! Studios is proud to announce HEX VET, an all-new hardcover original graphic novel from cartoonist Sam Davies (Stutterhug). In a world where magic is a part of daily life, Nan and Clarion are determined to be the best veterinarian witches of all time. Between life, animals, and magic, these two witches will soon realize that they have a lot to learn—and not just about how to help a ghost cat have kittens. This story will take Nan and Clarion on fun adventures where they will get to learn more about each other, their strengths as veterinarians, and their equal passion for magical animals. Hopefully they’ll be up to the challenge of running a clinic, saving lives, and staying on their boss’ good side!

“HEX VET is centered around a magical veterinary practice which means I get to draw as many strange animals I can think of AND include a lot of witchy nonsense,” said Sam Davies. “I’m in heaven. Unusual pets are a running theme in my webcomics work, so it’s exciting to expand that into a full story with characters who are totally unprepared to deal with all the creature troubles I’m going to throw at them.”

HEX VET is the latest release from BOOM! Studios’ critically acclaimed KaBOOM! imprint, publisher of world-class licensed series such as Adventure Time, Steven Universe, Over the Garden Wall, Peanuts, and Rugrats along with original series like Ruinworld by Derek Laufman, Brave Chef Brianna by Sam Sykes and Selina Espiritu and The Deep by Tom Taylor and James Brouwer.

“HEX VET is the perfect comic for anyone who’s wondered where witches take their cats when they snag a tooth or who takes care of a magical girl’s familiar,” said Whitney Leopard, Editor, BOOM! Studios. “Sam brings an incredible amount of heart, compassion and thrills to the story of what it means to truly care for the life surrounding us, especially when there’s magical surprises around every corner!”

Print copies of HEX VET will be available for sale in December 2018 at local comic book shops (use comicshoplocator.com to find the nearest one), bookstores or at the BOOM! Studios webstore. Digital copies can be purchased from content providers, including comiXology, iBooks, Google Play, and the BOOM! Studios app.

For more on HEX VET and other projects from BOOM! Studios, stay tuned to www.boom-studios.com and follow @boomstudios on Twitter.

About BOOM! Studios
BOOM! Studios was founded by Ross Richie in 2005 with the singular focus of creating world-class comic book and graphic novel storytelling for all audiences. Through the development of four distinct imprints—BOOM! Studios, BOOM! Box, KaBOOM!, and Archaia—BOOM! has produced award-winning original work, including Lumberjanes, The Woods, Giant Days, Klaus, and Mouse Guard, while also breaking new ground with established licenses such as WWE, Mighty Morphin Power Rangers, Cartoon Network, and The Jim Henson Company properties. BOOM! will also bring their original series to life through unique first-look relationships with 20th Century Fox for film and with 20th Television for the small screen. Please visit www.boom-studios.com for more information.