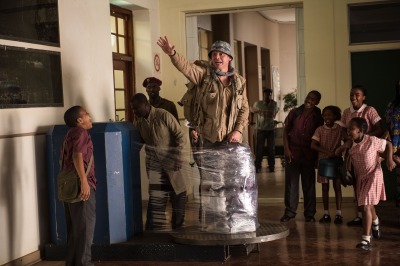 What makes Hector and the Search for Happiness work is not the events of the story, familiar as they are, but the approach. The film is very British – the Mitty-esque Hector is a decently successful psychiatrist who looks to have everything: an intelligent, beautiful girlfriend, Clara (Rosamund Pike); a lovely home, and a successful practice in which he does seem to actually help people. Looks can be deceptive.

When a psychic patient, Anjali (Veronica Ferres) tells Hector he’s unhappy, it’s a jolt. He might be a bored with how his life is going, but the word unhappy was one he hadn’t considered in relation to himself. Deciding it’s true, he resolves to find out what makes people happy and try to apply it to himself.

He takes a sabbatical, with Clara’s support, and sets off. First stop China, where a rich businessman (Stellan Skarsgard) takes him his wing and shows him a good time – money, it turns out can only rent happiness. Hector’s note: Happiness could be the freedom to love two women at the same time’ is written before a rude awakening… 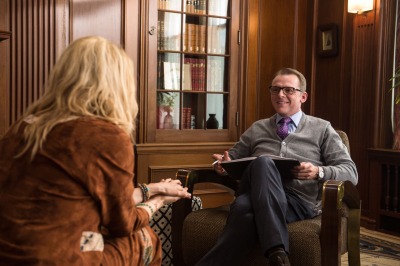 A visit to a Buddhist monastery reveals that they are closed on Mondays – ‘What part of Mondays don’t you understand,’ screams a monk before the abbot intervenes and asks Hector in. ‘He’s new,’ he says. Note: monks got Skype!

From China, Hector goes to Africa to help an old friend (Bruce Fontaine) with a traveling free clinic – a kind of Doctor Without Borders thing – and winds up meeting a drug kingpin (Jean Reno) and being kidnapped before his acquaintance with the drug kingpin gets him out of a tough spot. He comes away from Africa with more than a troubling experience – he comes away with a recipe for sweet potato stew.

On to Los Angeles, where he reconnects with his first love, Agnes (Toni Collette), who is happily married with two kids (and a third very much on the way). Through Agnes he meets a quirky university professor (Christopher Plummer) who is studying brain responses to emotions.

Unlike the Walter Mitty of the two Secret Life of Walter Mitty movies, Hector doesn’t really realize he’s desperately unhappy until purposefully jogged by his patient. Then, his immediate response is scholarly – he wants to study happiness and quantify it and then apply what he’s learned to himself! Like that could ever really happen.

Director co-writer Peter Chelsom does a nice job of making us feel Hector’s unhappiness before he acknowledges it; he keeps things moving quickly enough that we never quite see the seams between Hector’s ‘real’ situations and his daydreams – but immediately know the daydreams aren’t ‘real’ through their content. It’s a tricky balance. 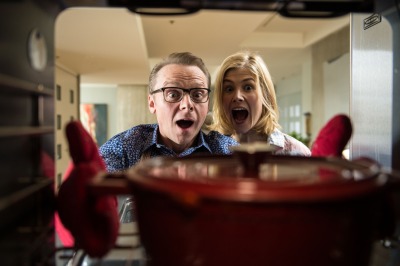 He also inserts some cute animated interstitials between segments of Hector’s journey – very much like the transitions used on the TV series My World and Welcome to It (which aired long enough ago that it’s probably just a coincidence – but an audience goes into a film screening with its own baggage and that colors everything it sees, too).

Although Hector and the Search for Happiness is a fable in much the same way as the Walter Mitty movies are, the disparity between its base reality and its imaginary have less of an impact than maybe they should, but the use of Pegg in such a different role makes up for a lot.

Though Hector’s other featured players aren’t given a lot of screen time, especially Pike (who is heartbreakingly good), they all contribute to Hector’s journey in important ways – though those contributions wind up boiled down to platitudes like ‘Happiness is being loved for who you really are.’