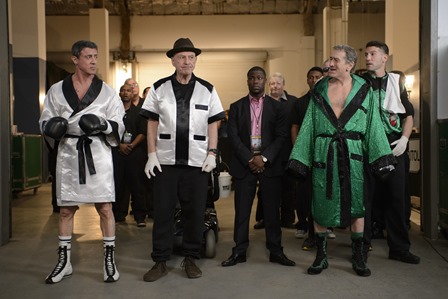 Imagine the ultimate movie boxing match: Rocky vs. The Raging Bull. Now think of them as thirty years past their prime. In a nutshell, that’s Warner Brothers’ Grudge Match – the Expendables of sports movies. Billy ‘The Kid’ McDonnen (Robert DeNiro) and Henry ‘Razor’ Sharp (Sylvester Stallone) fought twice back in the day, each winning once. The much anticipated deciding bout never happened – but now an encounter during a motion capture shoot for a videogame ignites both men’s passion for the ring. Alan Arkin and Kevin Hart also star.

Check out the trailer after the jump. Grudge Match is in theaters on Christmas Day.