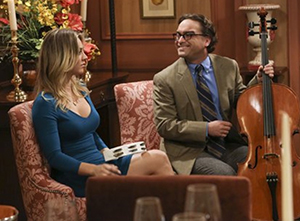 Not in the mood? All broken up? Can’t watch The Notebook one… more… time?

Well TBS has something for what ails you – it’s their Un-Valentine’s Day Marathon: choice anti-romantic episodes of The Big Bang Theory, Friends and Seinfeld.

So, follow the jump; check out the Un-Valentine’s Day video, and a complete schedule of the seven hours of unromantic fun that TBS has in store for you on   Saturday, February 14th from 4-11 (3-10C).

This Valentine’s Day, as lovebirds swoon over each other in amorous bliss, TBS is going to be commiserating with lonely hearts everywhere by exposing the true horrors of this thing called love. TBS’s Un-Valentine’s Day Marathon is going to pull back the curtain on dating mishaps and relationship pitfalls with seven hours of episodes from The Big Bang Theory, Friends and Seinfeld. The hilarious misery is set to air Saturday, Feb. 14, from 4 p.m. to 11 p.m. (ET/PT).

At the center of TBS’s Un-Valentine’s Day Marathon is a three-hour primetime collection of The Big Bang Theory episodes, including five that have never before been shown on TBS. In addition to the on-air marathon, TBS is encouraging fans – especially those watching alone – to post their own dating horrors online using the hashtag #UnValentinesDay.

TBS’s Un-Valentine’s Day Marathon will kick off at 4 p.m. with two hours of Friends, including the first-ever appearance of Chandler’s ever-annoying girlfriend, Janice (Maggie Wheeler); a night of disastrous blind dates; and a two-part tale about a series of dating misadventures for Rachel, Ross, Chandler and Joey. Guest stars include Julia Roberts, Jean-Claude Van Damme, Brooke Shields, Chris Isaak and Jon Lovitz.

At 6 p.m., Seinfeld takes over with four of Jerry’s unforgettable girlfriends, including one with “man hands,” one who wears the same dress every day, one who might have breast implants and one whose name Jerry can’t for the life of him remember. Teri Hatcher and Susan Walters are among the guest stars.

The Un-Valentine’s Day Marathon will climax in primetime with six episodes of The Big Bang Theory, including looks at the relationship struggles between Penny & Leonard, Amy & Sheldon and Howard & Bernadette. The collection includes two Valentine’s Day episode, as well as the latest appearance by Bob Newhart in his Emmy®-winning role as Professor Proton, Sheldon’s TV idol.

A complete schedule of TBS’s Un-Valentine’s Day Marathon is included below.

4 p.m. – “The One With the East German Laundry Detergent” – While Phoebe and Chandler end their respective romantic relationships, Rachel and Ross do laundry together on their first date. Meanwhile Chandler tries to break up with his annoying girlfriend, Janice (Maggie Wheeler).

4:30 p.m. – “The One With the Blind Dates” – Phoebe and Joey set Ross and Rachel up on terrible blind dates, hoping they’ll get back together. Ross gets stood up, and Jon Lovitz guest stars as Rachel’s dating horror story.

5 p.m. – “The One After the Super Bowl (Parts 1 & 2) “ – When the gang travels to California, Joey dates a stalker (Brooke Shields) who thinks he really is Dr. Drake Ramoray. Chandler dates an old school friend, played by Julia Roberts. And Rachel and Monica fight over Jean-Claude Van Damme. Chris Isaak, Roark Critchlow and Fred Willard also guest-star.

6:30 p.m. – “The Seven” – Jerry realizes his girlfriend (Lisa Deanne) has been wearing the same dress every day. And Elaine loses a bike to Kramer.

7 p.m. – “The Implant” – Jerry dumps his girlfriend, played by Teri Hatcher, after Elaine says her figure is the result of breast implants.

7:30 p.m. – “The Junior Mint” – Jerry can’t remember his girlfriend’s name, though she told him it rhymes with a part of the female anatomy. Susan Walters guest-stars.

8:30 p.m. – “The Romance Resonance” – Each of the couples express romance in different ways as Sheldon makes a major scientific breakthrough and Howard makes a grand romantic gesture.

9 p.m. – “The Cooper Extraction” – Sheldon’s friends imagine life without him, including his relationship with Amy.

9:30 p.m. – “The Locomotive Manipulation” – Amy plans a romantic Valentine’s Day on the Napa Valley Wine Train. And Leonard and Penny make an emergency visit to the vet with Raj’s dog.

10 p.m. – “The Table Polarization” – Leonard’s purchase of a dining-room table for the apartment causes the couples to re-examine their relationships.

TBS is basic cable’s reigning champion among young adults in primetime. Available in 101 million households, TBS features original scripted comedies like Cougar Town, Ground Floor and American Dad!, as well as the upcoming Angie Tribeca, Your Family or Mine and Buzzy’s. TBS also features original unscripted series like King of the Nerds, Deal With It, Funniest Wins and the upcoming Meet the Smiths, starring Kenny Smith and family. In late night TBS, is home to the Emmy®-winning series CONAN, starring Conan O’Brien. The TBS lineup also includes popular contemporary comedies, such as The Big Bang Theory and Family Guy, along with blockbuster movies and championship sports.