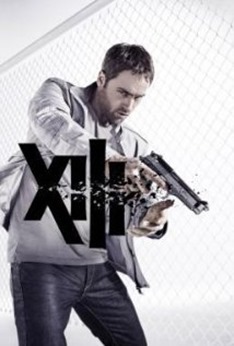 It’s the story of a man left to rot in an Eastern European prison with no memory and no future. He escapes and begins the quest to find out who he is; why he was imprisoned – was he a hero or a monster. As he learns more about himself, he discovers a global conspiracy.

Giant Ape Media will release the complete series on DVD, in two volumes, on September 16th.

Stuart Townsend (Queen of the Damned) and Aisha Tyler (Archer, 24) star in this espionage-filled series from the producer of NCIS and 24.

The series was developed and produced by Prodigy Pictures (Lost Girl) and Luc Besson’s production company (La Femme Nikita, Taken, and The Transporter trilogy) and is a continuation of the XIII miniseries starring Stephen Dorff and Val Kilmer (released on DVD and Blu-ray as XIII: The Conspiracy), with various actors reprising their roles.

Agent XIII was left to rot in an Eastern European prison with no memories of his past or hope for his future. After a high-stakes breakout, he finds himself immersed in a network of spies and special agents as he attempts to figure out if the man he used to be was a patriot or a monster. Along the way, he uncovers a global conspiracy reaching from the Oval Office to the prisons of Venezuela involving plans for a weapon that could forever change the balance of international power. But when you’re a rogue agent on the run from both government agencies and terrorist cells, is there anyone you can really trust?

Originally airing on broadcast on Reelz in 2012-2013, XIII-The Series also aired in Canada and France.

Giant Ape Media will release the series in two parts on DVD on September 16, 2014.

Giant Ape Media, established in 2011, is a film division of Group 1200 Media, one of the nation’s leading independent home video entertainment companies. It specializes in the distribution of independent and live action films as well as non-English-language films.  In 2012, Giant Ape Media launched with the release of the Canadian supernatural crime drama TV series, Lost Girl.  Giant Ape Media is currently focusing efforts on acquisition and distribution of original titles and other new intellectual properties.