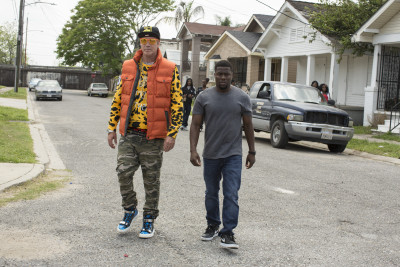 The set-up is exactly as stated in the trailer: white, middle-aged hedge-fund manager James (Will Ferrell) is sentenced to hard time for fraud and enlists the aid of his regular car wash guy, Darnell (Kevin Hart) – whom he wrongly assumes to have survived prison time – to teach him how to do just that. Even before it’s even expressly spelled out, we can be sure that: (a) James is innocent and (b) Darnell has never been in prison.

James is arrested in the middle of his engagement party – he’s marrying the boss’ daughter, Alissa (Alison Brie), who is as viciously entitled as he is naively entitled – and is given thirty days to get his affairs in order before reported to San Quentin.

His boss, Martin (Craig T. Nelson) promises he will find a way to keep him out of jail. Martin’s lawyer, Peter (Greg Germann) represents him in court. And before the first act is over, we know they’re behind it. If this was Trading Places these two would be Ralph Bellamy and Don Ameche to Ferrell and Hart’s Dan Ackroyd and Eddie Murphy.

Not that Get Hard is as good as Trading Places – though it’s a good deal closer than most critics will be willing to accept (Ferrell and Hart do have the same kind of combustible comic chemistry as Ackroyd and Murphy). One area in which they do exceed that pair is in their Mutt and Jeff physical presence – just seeing 6’3” Ferrell and 5’4” Hart next to each other really accentuates all their other differences.

Much is made of never-convicted-of-anything Darnell training never-guilty-of-anything-except-being-good-at-his-job James – his research for what he’s doing is to call a cousin who did do time – and one of the film’s best conceits is the way he turns James mansion and grounds into a quasi-prison. And enlists James’ staff to play fellow inmates. 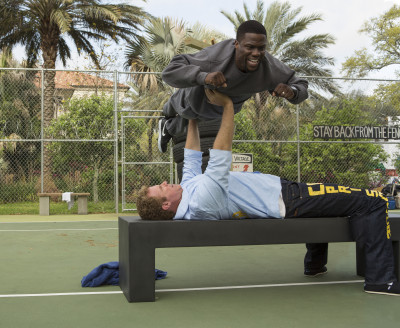 James, naïf that he is, is so easily impressed that – when shown support by Darnell’s cousin and his crew – he nearly buys into the gang’s mentality. He is helped in gaining their support by showing them how to make money in the stock market – it’s just as cutthroat as their usual work, but completely legal. That the film shows them being bright enough to understand that – and smart enough to almost seduce James to the dark side – is one of the more unexpected good things about Get Hard.

Something else that is impressive is the way that, comparatively speaking, Ferrell and Hart dial down their acts in service to the story – though they do have some inspired improv riffs (a sequence in which Darnell pretends to be not one, not two, but three convicts of dynamically different times is inspired).

Beyond not getting that Get Hard is ridiculing racists and homophobes, anyone who finds the movie objectionable need to be asked this question: have you ever seen a Will Ferrell or Kevin Hart movie?

Because of films like Everything Must Go and Stranger Than Fiction, there is some reason to find Ferrell’s restraint unsurprising, but even in much less rowdy films, Hart is usually dialled way up so this counts as a bit of a revelation.

What’s really cool – above and beyond everything else that I enjoyed about this movie – the two give each other amazing support by taking turns being the straight man. In addition, though few other characters get a lot of screen time, they do what they have to do very well.

Although Get Hard is not likely to ever be thought of as a comedy classic, it’s far funnier than the trailers would have you believe (who did those trailers, anyway?).