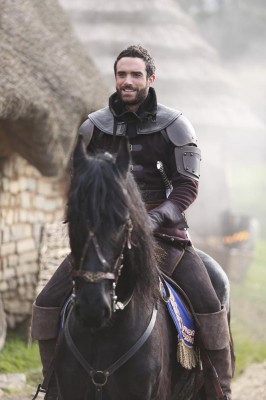 It takes a lot of nudging by his squire, Sid (Luke Youngblood, Community, Harry Potter) and a chance to free a beautiful princess (Karen David, Castle, Strike Back) and her country from invasion by Richard to jolt him from his woeful alcoholic one man pity party.

Of course, it’s not easy to get back on the hero horse once you’ve fallen off to such a huge degree, so part of the fun is watching Galavant trying to regain his dulled skills. It doesn’t help that Princess Isabella has a secret that could prove problematic.

Galavant was created by Dan Fogelman (Crazy Stupid Love, Tangled), with songs by Alan Menken (The Little Mermaid, Aladdin, Beauty and the Beast) and lyricist Glenn Slater (Tangled). Freed from what could have been the constraints of a period piece (thanks to Monty Python and others), the trio creates a coherent world while playing with our expectations at every turn. 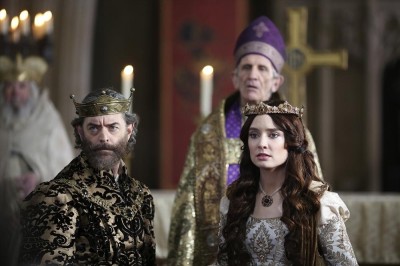 Played straight, as a musical drama, Galavant would get tired quickly, but by playing with the Hollywood musical and a toned down but not dull kind of Pythonesque disregard for form and anachronism allows Fogelman, Mencken and Slater to give us a wicked commentary under the plot (of which there’s quite a lot) and, sometimes, overtop it (in the second episode, for example, Galavant comments on his being out of shape in a unique way that completely changes our perspective on the opening song).

Galavant’s cast is superb – even smaller parts (Vinnie Jones as Richard’s right-hand man, Gareth; Darren Evans, Richard’s chef) are golden. The writing in the first two episodes (ABC is running Galavant with back-to-back eps weekly) is sharp – the wit of the dialogue is only outdone by the wit in the songs.

Musicals haven’t been particularly welcome on North American television – Cop Rock, anyone? – but Galavant could change that. It’s smart, fast-paced fluff that will amuse and intrigue – maybe even dazzle.

Give it a chance and you might well be whistling/humming the tunes the next day (lots of earworms here!).

Photos by Nick Ray/Courtesy of ABC