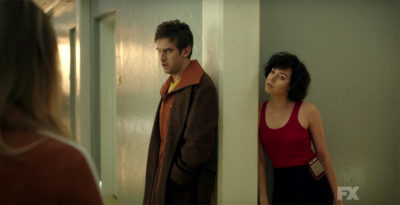 Each show’s panel will provide a sneak peek at what’s to come – and will be followed by a discussion with its producers and stars. Details feel the jump.

Get a Sneak Peek of the Highly Anticipated New Series Legion, inspired by Marvel’s X-Men comics, Followed by a Panel Discussion with the Stars and Producers

LOS ANGELES – September 12, 2016 – FX will bring the Emmy®-winning animated series Archer and the highly anticipated new drama series Legion, inspired by Marvel’s X-Men comics, to fans at New York Comic Con with exclusive video content and panel discussions with the stars and producers of the series.

Join FX Networks for an exclusive sneak peek at Legion, the highly-anticipated drama series from showrunner Noah Hawley (Fargo), followed by a moderated discussion and audience Q&A. Inspired by the character from Marvel’s X-Men comics, Legion is the story of David Haller (Dan Stevens), a troubled young man who may be more than human. Join Showrunner/Executive Producer/Writer/Director Noah Hawley, Executive Producer Lauren Shuler Donner and Executive Producer and Head of Marvel Television Jeph Loeb, as well as stars Dan Stevens, Rachel Keller, Aubrey Plaza and others, to learn more about Legion. This panel is one you will not want to miss!

FX is the flagship general entertainment basic cable channel of FX Networks, a business unit of 21ST Century Fox. FX Networks is comprised of FX, FXM and FXX. Launched in June of 1994, FX is carried in 91 million homes. The diverse schedule features a growing roster of critically-acclaimed and award-winning hit dramas series, including The Americans, The Strain and the upcoming Taboo and Legion; the critically-acclaimed limited series American Horror Story, Fargo, American Crime Story and the upcoming Trust and Feud; acclaimed hit comedy series including the award-winning Louie, Archer, Baskets, Better Things and Atlanta. In 2016, FX received a basic cable record 56 Emmy® Award nominations, including outstanding program nominations for The People v. O.J. Simpson: American Crime Story and Fargo (Limited Series), The Americans (Drama Series) and Archer (Animated Program). FX is the former home of the critically-acclaimed and award-winning hit drama series The Shield, Nip/Tuck, Rescue Me, Damages, Sons of Anarchy and Justified. The network’s library of acquired box-office hit movies is unmatched by any ad-supported television network. FX’s roster of acquired hit series includes Two and a Half Men, How I Met Your Mother and Mike & Molly.