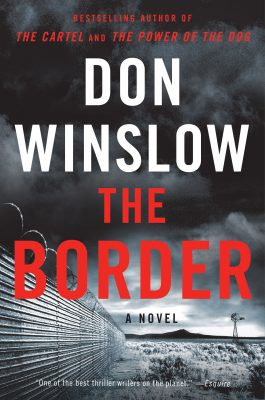 FX Networks has landed the rights to bestselling author Don Winslow’s acclaimed Cartel Trilogy – The Power of the Dog, The Cartel and The Border.

The trilogy follows DEA agent Art Keller on a harrowing 45-year journey through America’s longest-running war: the War on Drugs.

Network Will Develop TV Series Adaptation of #1 International Bestselling Author Don Winslow’s “Cartel” Trilogy, The Power of the Dog, The Cartel and His Latest Release, The Border

LOS ANGELES, March 6, 2019 – FX Networks has landed the rights to bestselling author Don Winslow’s acclaimed Cartel Trilogy, which The New York Times called “a hybrid of The Godfather and War and Peace” and “this generation’s defining work of American mass-culture storytelling on the border,” it was announced today by John Landgraf, CEO of FX Networks and FX Productions.

“I have known and respected Shane Salerno and Don Winslow for almost 20 years, and am beyond thrilled to be working with them again on the series adaptation of Don’s magnum opus – the trilogy made up of his three critically beloved and commercially successful novels, said Landgraf. “Don has masterfully woven his intricately detailed research into cartel’s and America’s war on drugs into what is widely regarded as one of the great crime epics of all time. Nothing excites the team at FX more than the daunting challenge of helping great creators make a television show as ambitious and good as the epically acclaimed books on which it will be based. “

The three global bestsellers in the trilogy – The Power of the Dog (2005), The Cartel (2015), and The Border (2019), which debuted on The New York Times bestseller list today at #3 – have sold millions worldwide. The trilogy, massive in scope and ambition, follows a DEA agent, Art Keller, on a harrowing 45-year journey through America’s longest-running war: the War on Drugs. Shocking in its brutality, raw in its humanity – it portrays Mexican cartel power struggles, the narcos and cops on both sides of the border, the traffickers and drug mules, lawyers, journalists, junkies, teenage hitmen, children seeking asylum, and political corruption from poppy fields in Mexico to the White House.

“We have long admired the excellence that John Landgraf and his creative team have built and sustained across many years at FX, which makes them the perfect creative partner for us,” Salerno and Winslow said. “These books represent over twenty years of our lives and we care deeply about how they are adapted. We are excited to work with John and his team on what we hope will become the definitive television series on this subject matter.”

Winslow and Salerno will both serve as Executive Producers. Salerno will co-write the pilot with a writer/showrunner to be named soon. FX is producing with The Story Factory. Ridley Scott will also serve as an Executive Producer. While Winslow and Salerno will not be day-to-day showrunners, they will be closely involved in shaping and sustaining the series, and making sure that it maintains the same level of quality that readers of the books have come to expect.

Winslow’s 2017 book, the acclaimed New York Times bestseller The Force, sold to Fox in a seven-figure deal and is being adapted by Oscar-nominated director James Mangold and Oscar-nominated screenwriter Scott Frank for Fox. Winslow’s novel Satori remains in development at Warner Brothers for producer and star Leonardo DiCaprio.

Landgraf, Winslow, and Salerno have a long history together, dating back to the 2001 NBC television seriesUC: Undercover, which Winslow and Salerno co-created and executive produced with Landgraf when he ran Jersey television. Winslow and Salerno were fielding feature film offers for the Cartel Trilogy, but in the end made the decision to go to FX based on Landgraf and his creative team’s Emmy winning track record with ambitious material, including The People vs. O.J. Simpson, Sons of Anarchy, Justified, Fargo, and The Assassination of Gianni Versace, among many others.

The three novels have been praised by The New York Times (“You don’t read these books, you live in them”), The Washington Post (“Rarely has hell been so compelling”), Rolling Stone (“A Game of Thrones of the Mexican drug wars”), NPR (“Shakespeare for our times”), The Arizona Republic (“Quite simply the most important crime saga in modern literature”), as well as by other major authors such as Stephen King (“It’s social fiction to rival Tom Wolfe and John Steinbeck”), Michael Connelly (“Winslow is a master”), and James Ellroy (“This is the War and Peace of dopewar books”).

The trilogy has made Winslow not only a #1 international bestselling author, but also a central figure in the national debate over border security, the handling of migrant children, the opioid crisis, and the influence of foreign money on the highest levels of U.S. government. His public criticism of President Trump’s drug and immigration policies has included features and profiles in major publications such as Vanity Fair, Esquire, The Los Angeles Times, Rolling Stone, and Entertainment Weekly, and on national television networks such as CBS, MSNBC, PBS and CNN.

The Story Factory, long a premium supplier of books to film, is now pushing into television. They are also behind the James Comey mini-series at CBS, which is written by Oscar-nominated writer Billy Ray.

Winslow’s deal was made by CAA and The Story Factory. Salerno’s deal was negotiated by CAA and Robert Offer and Shelby Weiser of Sloane, Offer, Weber and Dern, LLP.