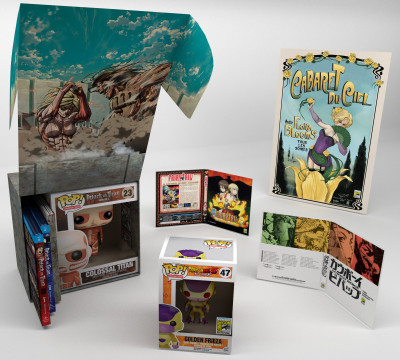 LOS ANGELES, CA – July 3, 2015. FUNimation® Entertainment announced today at Anime Expo details on its line-up of exclusive merchandise for the 2015 San Diego Comic-Con taking place July 9 – 12, 2015. A total of five (5) exclusive items will be available for purchase or as a gift with purchase at FUNimation’s booth (#4135).  All items are in limited quantities and are only available to the public at San Diego Comic-Con while supplies last.

“San Diego Comic-Con is the top pop culture convention in the country and an important event for FUNimation every year,” said Mike DuBoise, COO of FUNimation Entertainment.  “We’re pleased to be offering our largest line-up of exclusives ever, including our Dragon Ball Z: Resurrection ‘F’ and Attack on Titan brands – both of which have major theatrical releases later this summer and fall.”