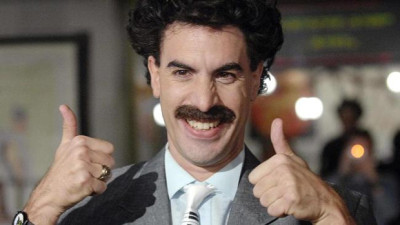 A mockumentary, a splicing of the words “mock” and “documentary”, is a film (or television show) in which a subject is parodied by relaying fictional events in a documentary style manner as if they are real. They often consist of recreations of events which are presented as being factual, interspersed with interviews of individuals (often real-life characters to add to the illusion of reality) commenting on whatever the subject at hand is.

The term really came in to use with the release in 1984 of ‘This is Spinal Tap’. This is surely the most famous example of the genre. Here, we have a look at some of the other great examples of the mockumentary that are definitely worth checking out:

Played by Sacha Baron Cohen of Ali G fame, Borat charts the adventures of fictitious Kazakh journalist Borat Sagdiyev and his hilarious and often cringe-worthy interactions with ordinary Americans. Much of these scenes are unscripted and the ‘victims’ genuinely believe they are interacting with someone totally ignorant of American lifestyle and customs. Borat the character is a brilliant device that is employed to pry into the lives of people. Such encounters often make difficult viewing in many scenes but reinforce this point brilliantly.

A movie that looks at one of the greatest comebacks in the history of soccer. The scene is the European Cup final of May 2005 in Istanbul. Liverpool FC are 3-0 down at half-time to Italian giants AC Milan and look dead and buried. However, in the second half they incredibly fought back to score three goals, take the game to extra time and triumph on penalty kicks. The film itself revolves around a reporter who discovers a missing film of the game-changing half-time team talk Liverpool coach Rafa Benitez gave his team. The film features appearances of actual players Steven Gerrard, Jamie Carragher and Dietmar Hamann. If the excitement of European soccer sounds appealing, why not check out Bet 365’s Uefa competitions betting pages for all the latest odds and see if you can spot an event similar to Liverpool’s comeback which could shock the bookmakers.

Following the trials and tribulations of five dog owners at a prestigious dog show, Best in Show takes a hilarious look behind the scenes before, during and after the competition at the Mayflower dog show. The characters are a real strong point of the film and are totally over the top. We have the Flecks from Florida and it sees the female character continuously running into old lovers. There is also wordless senior citizen in a wheelchair and his buxom young wife, who may have a thing for the dog’s handler. In another hilarious twist, from the pine woods of North Carolina, comes a guy who wants to be a ventriloquist. This is definitely mockumentary is definitely worth a watch if you have not yet seen it.