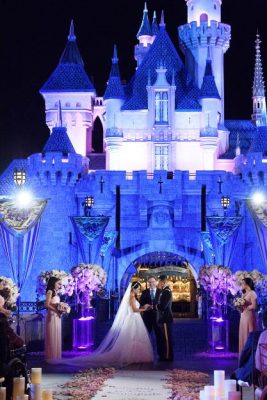 Freeform has announced an seven-episode order for Disney’s Fairy Tale Weddings – a show that would take viewers behind the scenes of some of the most epic, most romantic engagements and weddings at  Disney Destinations around the globe.

Freeform, Disney’s young adult television and streaming network, today announced a seven-episode series order for “Disney’s Fairy Tale Weddings” from executive producers Ann Lewis Roberts, Simon Lythgoe and Jenny Daly, in partnership with Walt Disney Parks & Resorts. Premiering in spring 2018, each hour-long episode will give viewers a behind-the-scenes look at some of the most spectacular weddings and engagements at Disney Destinations around the globe. From a sun-drenched holiday proposal at Aulani, a Disney Resort & Spa in Hawaii, to a winter wonderland wedding at Walt Disney World Resort in Florida, viewers will be guests from the start of each couple’s “happily ever after” journey.

“We are creating one of the most beautiful shows in the world with ‘Disney’s Fairy Tale Weddings’ and Disney Parks & Resorts, where they make couples’ dreams come true,” said executive producer Ann Lewis Roberts, “making a couple’s fantasy into a reality by transforming their wedding into an event more magical and spectacular than they could have ever imagined.”

On the heels of the breakout special that aired in May 2017, “Disney’s Fairy Tale Weddings” garnered nearly three million views across linear and digital, making it Freeform’s highest-rated unscripted TV special to date.

“Continuing on the success of Freeform’s ‘Disney’s Fairy Tale Weddings’ summer special, we are continuing to invest in our relationship with the ‘Disney’s Fairy Tale Weddings’ team to bring magic and spirit to viewers everywhere,” said Kary McHoul, senior vice president, Programming & Development, Unscripted, Freeform. “We can’t wait to make wedding dreams come true with the most epic wedding planning team in the world.”

Disney’s Fairy Tale Weddings & Honeymoons is an evolving business offering wedding experiences and expert advice that has been making wedding and honeymoon dreams come true for over 25 years. The brand is based on fantasy, global wedding planning services and the desire to make wedding dreams a reality.

Based in Los Angeles and led by Jenny Daly, T Group Productions develops, sells and produces across all genres for broadcast and cable networks, both domestically and internationally, as well as digital platforms.  Since its launch in 2010, the company has produced over 50 series, specials and pilots including over 100 episodes of Mystery Diners (Food), Storage Hunters (truTV), A Wicked Offer (CW), Hollywood and Football (E!) among many more.  The company’s current slate includes Ozzy and Jack’s World Detour (A&E), Return of the Mac (Pop), 24 to Life (LMN), Build it Like Bendrick (DIY), I Catfished My Kid (TLC), Disney’s Fairy Tale Weddings (Freeform) among many more.  The company also has co-production partnerships with award-winning producers Ann Roberts of Roberts Media and Simon Lythgoe of Legacy Productions as well as Jack Osbourne’s Osbourne Media, Sunshine Sach’s sister company Madica Productions and Beth Greenwald of Wax World Media.