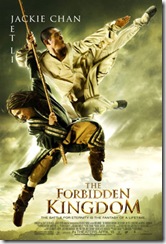 For a long time, fans of martial arts movies have longed to see Jackie Chan and Jet Li do a film together. Well, even though Chan is noticeably a step slower, and the real hero of The Forbidden Kingdom is a time-traveling poor white kid from the present, the two still provide a lot of fun in a movie that’s a fun riff on a number of martial arts movie themes.

One of the many joys of a good martial arts movie is that there are actual characters and something of a plot, as well as well choreographed martial arts expertise. The Forbidden Kingdom has all three – plus a kind of goofy charm.

Jason Tripikitas [Michael Angarano] loves martial arts movies and is constantly checking for new titles at Old Hop’s [Jackie Chan] pawnshop. Unfortunately, his love of martial arts movies gets him into trouble with neighborhood bully Lupo [Morgan Benoit] and after being coerced into helping the thug rob the pawnshop – and getting Old Hop shot – he grabs a golden staff and flees, with Lupo close behind. Unlike his martial arts heroes, Jason isn’t good with climbing and scrambling and a nasty fall seemingly projects him back in time to ancient China. 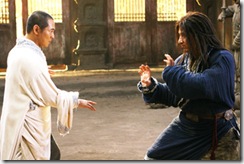 There he encounters Lu Yan [Jackie Chan], who recognizes the staff and tells Jason a story about the Monkey King [Jet Li] and he was tricked into giving it up by the Jade Overlord [Collin Chou] centuries before. It is Jason’s responsibility to return the staff to its rightful owner. An encounter with the Jade Warlord’s men force the two to flee and they encounter a Silent Monk [Jet Li], who steals the staff because he is searching for the one who will return it to the Monkey King.

The Forbidden Kingdom follows certain arcs that will be familiar to fans of the genre: the formation of a band of heroes [Lu Yan, the silent Monk, Jason and Golden Sparrow – a beautiful girl whose parents were murdered by the Jade Warlord]; a villain who commands overwhelming forces [The Jade Warlord] and employs evil magic [here in the form of The Witch, played with gusto by Bingbing Li].

The biggest twist comes when Lu Yan learns [seconds before being attacked by the jade Warlord’s men] that Jason doesn’t know any kung fu! Which leads into another martial arts movie tradition, the training montage. Some of the movie’s funniest material involves Lu and the Monk teaching Jason. 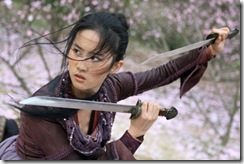 Jackie Chan’s Lu Yan is a delightfully silly riff on his “drunken master” character, but there’s another reason he is always carrying a supply of booze. Jet Li’s Silent Monk takes a classic martial arts archetype in another unexpected direction. Angarano’s Jason is, as Zaphod Beebelbrox’s psychiatrist would say, is “just this guy, y’know?” The angriest character in our band of heroes is Golden Sparrow, but Liu Yifei gives her a slightly ethereal quality by having her display her musical side.

The villainous Jade Warrior is, of course, pure evil with no redeeming qualities. In fact, his treatment of the Monkey King is strictly against the orders of the Jade Emperor, who has left him in charge while he spends several centuries sleeping [or something]. 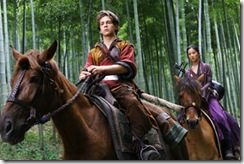 The dialogue is a bit clunky at time, as if the awkward subtitling of Hong Kong movies was simply being spoken aloud instead of appearing at the bottom of the screen. In an odd way, that’s one of the film’s charms. 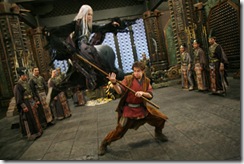 Of course, it is noticeable that Jackie Chan isn’t as quick as he used to be, but his drunken acrobatics still have considerable charm – and make for a good contrast to Jet Li’s more formal style. Liu Yifei also impresses with her slightly slyer style and her use of knives. Angarano seems to bulk up just a bit over the course of the film, which adds emphasis to his progress with kung fu.

The Forbidden Kingdom makes good use of Master Woo-ping Yuen’s knack for creative choreography, and Rob Minkoff’s direction is as offbeat and sly as the Monkey King. John Fusco’s script provides plenty of oddness, and a few genuinely clever surprises. For most North Americans, though, the biggest surprise might well be how well Chan and Li act. Given their backgrounds – especially Chan’s – that shouldn’t be the case, but that’s just how it is.

The Forbidden Kingdom may not be a classic martial arts movie, but it’s got heart, a certain sneaky charm and more than enough pure fun to make up for that.