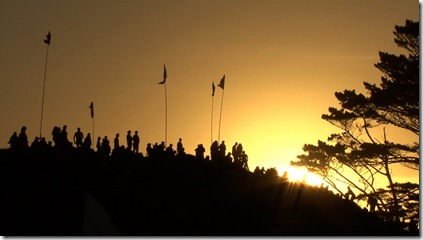 Fierce Light is a unique film by a unique filmmaker. Velcrow Ripper has won two Genie Awards [the Canadian Oscars®] and works exclusively in documentaries that examine the ways in which spirituality and action seem to be building together in activism around the world.

Fierce Light looks at the budding of an apparently worldwide growth in non-violent protest against tyranny, bigotry and destruction of the environment. Ripper even includes the last footage shot by one of his mentors and friends, Brad Will – shot even as the man was murdered. Non-violent protest, he seems to be saying, is not for sissies – it can [and does] have an appreciable impact if properly channelled.

He interviewed such luminaries in the growing movement as Congressman John Lewis, an American civil rights legend who marched with Dr. Martin Luther King Jr. and often spoke at the same events; Archbishop Desmond Tutu, the Nobel Peace Prize winner who fought apartheid in South Africa; Daryl Hannah, who fought the razing of that garden in South Central Los Angeles; Pulitzer Prize winning author Alice Walker, and a “dharma punk” named Noah Levine, who has taken the energy of his punker background and channelled it, with equal ferocity, into working for peaceful solutions to the problems that plague us all.

Fierce Light: Where Spirit Meets Action is provocative in its willingness to find correlations between independent actions set in motion around the world to achieve a better world through the kind of peaceful protests that have been inspired by such great men as Mahatma Gandhi. By shining a light on the spread of these non-violent movements, Ripper seems to be saying that, to quote The Beatles, “love is all you need” – and maybe a lot of determination. That may be a simplification of his message but his film speaks eloquently of the hope that is being generated by these many disparate events and people.

Although Fierce Light is a message film, it is not boring. Ripper is a masterful editor and sound designer and the film moves well and his storytelling skills draw us into the situations he explores. The soundtrack is compelling without being overbearing and he does have a way of drawing the most out of his interview subjects. Throughout, he is aware that to communicate a message you have to hold an audience’s attention – and fierce Light does very well.