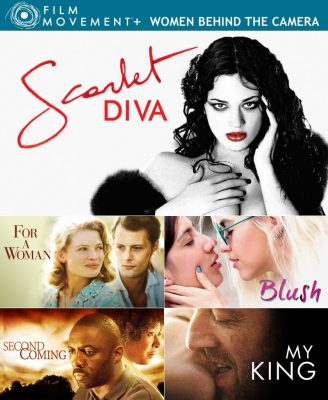 The newly launched OTT service Film Movement Plus continues its Women Behind the Camera series with the addition of five new titles including the controversial Scarlet Diva, starring and directed by Asia Argento.

See What All the Buzz is About with Argento’s Directorial Debut; Streaming Extras Include an Additional Version of the Film with New Commentary by Asia herself, the “Making of Scarlet Diva,” and More!

With More Than 20% of Their SVOD Catalog Dedicated to Women Directors, Additional Featured Titles Include BLUSH, FOR A WOMAN, MY KING and SECOND COMING

New York, NY (October 25, 2018) – Since its founding in 2002, pioneering film distributor Film Movement has made women-directed films one of the cornerstones of their library, and that’s echoed in FILM MOVEMENT PLUS, their newly-launched SVOD service. With more than 50 films in the “Directed By Women” category, cinephiles can enjoy a wide range of programming from some of the most talented women filmmakers working in contemporary cinema today. This Friday, October 26, “Women Behind the Camera” programming will be anchored by the streaming premiere of SCARLET DIVA, Asia Argento’s controversial 2000 directorial debut.

Called “a bravura piece of filmmaking” by The San Francisco Chronicle and “a dazzlingly self-assured directorial debut” by LA Weekly, Argento’s dark, raw and visceral semi-autobiographical directorial was applauded by critics upon its release in 2000. Also in front of the camera, Argento plays Anna Battista, a rising young actress who, despite her popularity and success, experiences despair and degradation at the hands of the film industry. As recounted by Rolling Stone, ” SCARLET DIVA became a cult favorite, but popular interest in the film rose last October when Argento came forward as part of Ronan Farrow’s first Weinstein exposé in The New Yorker. ” Adding in-depth context and background to SCARLET DIVA, FILM MOVEMENT PLUS will also feature bonus programming including the featurettes “The Making of Scarlet Diva” and “Looking into the Eye of the Cyclops with Joe Coleman,” an Asia Argento interview, original release promos, as well as an additional version of SCARLET DIVA, featuring a brand-new commentary track by Asia herself.

Additional WOMEN BEHIND THE CAMERA titles include:
BLUSH – From director Michal Vinik, who also scripted 2018’s Working Woman, comes this drama that Variety called “a fresh, frank look at coming out and coming of age”. 17-year-old Naama spends most of her free time drinking and partying in the hopes of escaping from her parents’ constant bickering, worsened by the recent disappearance of her AWOL soldier sister. When a free-spirited new girl shows up at school, Naama falls deeply in love for the first time and the intensity of the experience at once confuses her and gives her life new meaning.

FOR A WOMAN — After their mother’s death, a filmmaker (Sylvie Testud) and her sister discover a cache of old photos and letters that lead them to unravel their parents’ tangled relationship with a mysterious uncle. French filmmaker Diane Kurys, best known for her 1983 Oscar-nominated breakthrough Entre Nous and her Palme d’Or-nominated A Man in Love, fills the screen with this unforgettable film called “an evocative, witty portrait of love, longing, ideology and desolation in post-World War II France” by Marci Schmitt of The Minneapolis Star Tribune.

MY KING – Acclaimed French multi-hyphenate Maïwenn helmed this drama that competed for the Palme d’Or at Cannes in 2015, and earned Emmanuelle Bercot the award for “Best Actress”. After Tony (Bercot), is admitted to a rehabilitation center following a serious ski accident, she becomes dependent on the medical staff and pain relievers while looking back on a turbulent relationship she experienced with megalomaniac Georgio (Vincent Cassel). Who is this man that she loved so deeply, and how did she allow herself to submit to this suffocating and destructive passion? For Tony, the physical work of healing may finally set her free.

SECOND COMING – Idris Elba and Nadine Marshall star in director Debbie Tucker Green’s powerful, BAFTA-nominated slice-of-life drama.As busy, working parents, Jackie and Mark haven’t been intimate in quite some time. However, Jackie abruptly discovers that she is pregnant. She knows it’s not her husband Mark’s, but claims she hasn’t been with anyone else either. The unnerving side effects of her pregnancy begin to affect her mental state, creating turmoil within the family that is only made worse by Mark’s fury. SECOND COMING follows the close knit family over the course of a year as they navigate their way through family life and cope with an unexplainable pregnancy.

FILM MOVEMENT PLUS opens up a world of provocative, compelling and award-winning films from Film Movement’s singular library. Priced at $5.99 per month with a free 30-day trial, the SVOD subscription service, currently available on Roku, Apple TV, Amazon Fire, Android TV, mobile (iOS and Android), and Chromecast, offers consumers immediate access to 250 festival favorite feature films and 100 short films, including: THEEB, the 2016 Academy Award nominee for Best Foreign Film; AFTER THE STORM, a powerful family drama from 2018 Palme d’Or winner Hirokazu Kore-eda; HUMAN CAPITAL, a political thriller from Paolo Virzi (The Leisure Seeker) that was Italy’s Best Foreign Film submission for the 87th Academy Awards and MY LOVE, DON’T CROSS THAT RIVER, an unforgettable documentary about true love that transcends generations and cultures and is South Korea’s most successful film of all time. Classics from the Film Movement catalog include Bille August’s PELLE THE CONQUEROR, an Academy Award winner for Best Foreign Language Film in 1996 and much more.