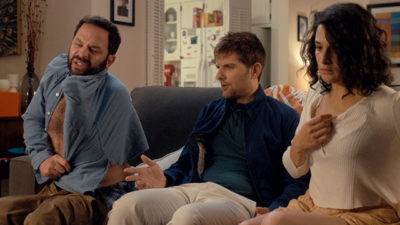 Nick Kroll, Adam Scott, and Jenny Slate star in this hilarious comedy that takes sibling rivalry to new heights. Bill (Kroll, Adult Beginners, Date Night) has always lived in the shadow of his overachieving brother Robbie (Scott, “Parks & Recreation”, The Overnight, Step Brothers), an arrogant athlete and local celebrity who happens to be blind. After years of thanklessly helping Robbie achieve one goal after another, Bill finally catches a break when he finds a connection with the charming Rose (Slate, Obvious Child, Zootopia), who is dealing with her own crisis. But when Rose starts dating Robbie, Bill must decide if he can finally put his own happiness over his brother’s and compete for the ultimate prize. Also starring Zoe Kazan (What If, Our Brand is Crisis).