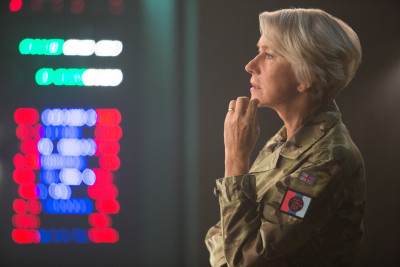 Eye in the Sky is an intense war film that examines the price of war. It suggests that the cost of war is too high – whether you’re in an actual on the ground conflict, or not.

This is Alan Rickman’s last film and it’s one that does his talent – and that of everyone involved – proud.

Eye in the Sky revolves around a decision to use a drone strike to take out three high profile terrorists in Nairobi while a young Kenyan girl sells bread outside the house the terrorists are using as a base – a decision complicated by the revelation that there are suicide bomber vests and explosives being set up for use in the near future.

We meet the characters in pretty short order – beginning with Col. Katherine Powell (Helen Mirren) as she gets up and gets ready for the day in her terrycloth robe and fuzzy slippers. Elsewhere, Lt. Steve Watts (Aaron Paul) is preparing to start his night shift as a drone pilot alongside Carrie Gershon (Phoebe Fox, The Musketeers). We watch General Frank Benson (Rickman) as he tries to figure out which doll to buy his granddaughter before heading into a briefing room to monitor a special mission.

Col. Powell is commanding what begins as an extraction mission – to bring a British traitor back home for trial. The operation is being monitored by a group of politicians and Powell’s commanding officer from a briefing room in London. Watts and Gershon will be manning the drone and there are Kenyan security people on the ground, providing pictures via two extremely small observation drones. 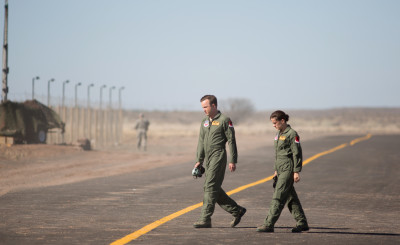 With the discovery of the vests, though, things change. The vests are estimated to be able to kill nearly a hundred people, so the mission now becomes a surgical strike. The only problem is the young girl, Alia (Aisha Takow), who we’ve just seen studying and playing with a hula hoop before heading off to sell that bread.

As one of the politicians notes, ‘If we kill them, we win the propaganda war. If we kill her, they do.’

And so begins a rousing game of ‘referring up’ – every one of the politicians has a position and the change in mission may be legal, but no one wants to commit to it. So they refer up: to the Foreign Minister, the Attorney-General, the U.S. Secretary of State and so forth.

Meanwhile Col. Powell stews and General Benson grows more exasperated by the second – dripping acid every time he asks, ‘Do we have permission to execute.’ Then, even when there’s clearance, Watts makes a request that, while it only seems right and fair, doesn’t do anyone’s nerves any good.

Throughout, one civilian official, Angela Northman (Monica Dolan), argues vociferously against the strike – clearly getting on everyone’s last nerve. 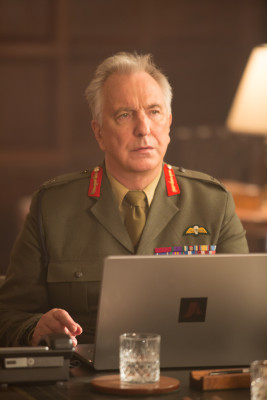 Gavin Hood (Rendition), working from a script by Guy Hibbert, thoroughly examines every facet of the arguments for and against the strike, while letting us get to know the characters – before and during the operation – just enough to have an investment in them and feel the gnawing uncertainty that they feel.

To contrast to the exasperation that grows in the single room sets of the briefing room and the drone pilot’s room, Hibbert and Hood give us an action-filled thread in which the man on the ground (Barkhad Abdi, Captain Phillips) tries to find a way to get Alia away from the blast radius of the drone strike.

The action sequences work in two ways: that contrast with the all the characters who have to sit in one place growing more frustrated, and using that contrast to heighten tension.

Eye in the Sky plays its political game of referring up dramatically, but it could easily have been as devastating a satire as Dr. Strangelove – but maybe, in a weird way, being a dramatic take makes it a Dr. Strangelove for this generation.

Either way, it’s a telling exploration of the cost of war – any war. There are no heroes here; no cause for cheers – at the end of their day, none of these characters will celebrate. They’ve achieved their goal but only the most oblivious will consider this a win (and there are some here that are just that oblivious).