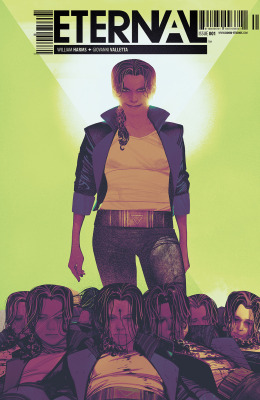 If you could live forever, would you want to? And what would the cost of eternal life be, exactly?

These questions are at the heart of BOOM! Studios’ new series, Eternal – created and written by William Harms and illustrated by Giovanni Valletta. Set in a world where cloning is legal and one can, effectively, live forever by repeatedly cloning oneself. Eternal will be in shop on December 10th. For more, follow the jump. 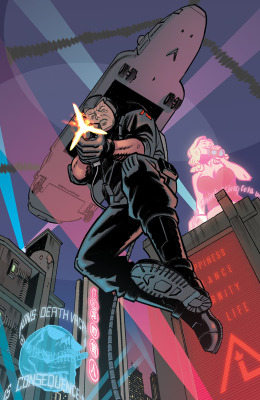 November 10, 2014 (Los Angeles, Calif.) – If you had the option of living forever, would you take it? This December, award-winning publisher BOOM! Studios continues its tradition of smart and thrilling sci-fi books with the launch of Eternal, a new series created and written by William Harms (Impaler, inFamous) and illustrated by Giovanni Valletta. Eternal takes place in a world where cloning is not only legal, but highly practiced to the point where a person can essentially achieve immortality by continually cloning themselves.

“BOOM! has always taken pride in the strong collection of sci-fi titles we offer, from The Hypernaturals to Six-Gun Gorilla, so we’re excited to add to that list this December with Eternal,” said BOOM! Studios Editor-in-Chief Matt Gagnon. “This is a world where life is extended past its natural ending, where science rules, and things like morality and ethics have taken a back seat. It’s a scary world, and one we can’t wait to share. William and Giovanni are swinging for the fences with this series.”

In Eternal, in a world of clones, the Human Liberation Army wants to free people from New Life’s grasp. Their leader Gail will take the most drastic, personal measures yet to do so. Rathmann, a former homicide detective turned New Life enforcer, is on the case, and is asking tough questions. Violet, a young girl and one of the few non-cloned humans—or Pures—left, is longing to enter the real world. But she has no idea the danger she is stepping into.

Eternal #1 arrives in comic book shops on December 10th with a main cover illustrated by Frazer Irving (Annihilator, Dawn of the Planet of the Apes) for the cover price of $3.99 under Diamond order code OCT141120. A retailer incentive cover drawn by Greg Smallwood (Moon Knight, Dream Thief) will be available in limited quantities. The Final Order Cutoff deadline for retailers is November 17th. Not sure where to find your nearest comic retailer? Use comicshoplocator.com or findacomicshop.com to find one! It’s also available for order directly from boom-studios.com.