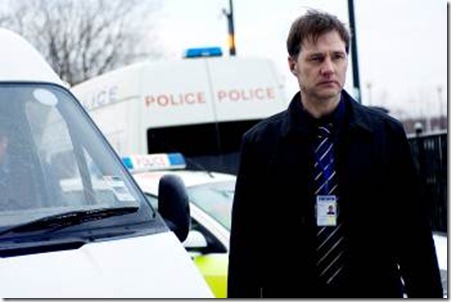 Encore has scheduled television adaptations of two of Mark Billingham’s Thorne mysteries – Thorne: Sleepyhead and Thorne: Scaredy Cat – for the next two nights (Tuesday & Wednesday, 9/8C). Both deal with serial killers in ways that mix elements of some of the classic British cop shows of the past with bits and pieces influenced by American procedurals. It’s an odd, but mostly successful mix.

Thorne: Sleepyhead introduces us to Detective Inspector Tom Thorne (David Morrissey , soon to be The governor on The Waking Dead), a taciturn cop with a tendency to follow his hunches – even in the face of mounting physical and circumstantial evidence leading in other directions.

Outside of pathologist Phil Hendricks (Aiden Gillen, Game of Thrones), he seems to have no other friends and, sometimes, it seems that he and Phil are friends only because of a dark secret that they share – a secret that is endangered by a series of sophisticated murders (the victims appear to have died of massive strokes) that lead to even Hendricks being a suspect. To make matters worse, the murders echo a triple killing from Thorne’s past – but the murderer is long dead.

When a survivor comes, Allison Willetts (Sara Lloyd-Gregory, superb in the role), to light, it’s both good news and bad – she’s alive, but has become afflicted with ‘locked in syndrome’. She is perfectly aware, but unable to move any part of her body except for her eyes. Thorne quickly becomes fascinated with Willetts’ neurologist, Dr. Anne Coburn (Natascha McElhone).

Thorne is lead on the investigation and saddled with a rookie partner, Detective Constable Dave Holland (O-T Fagbenle), until the killer takes a personal interest in him. To make matters worse, a colleague, DI Kevin Tugham (Eddie Marsan) seems to have it in for poor old Tom.

Thorne: Scaredy Cat finds Thorne on the horns of an even more peculiar dilemma: the possibility that that there might be a duo of serial killers working together – one hesitant, even strangely compassionate and the other pretty much a mad dog.

The case that sets off the investigation is the murder of two women in the same way – by strangulation. But there’s a hitch – one was simply strangled, while the other was strangled and her head brutally smashed against the floor of her flat. In an uncharacteristic bit of behavior, the woman’s young son, Charlie (William Wright-Neblett). 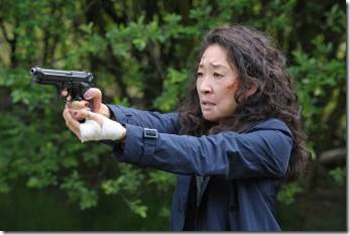 Joining Thorne and Holland on the investigation is Detective Sergeant Sarah McEvoy (Sandra Oh), a smart, aggressive, ambitious detective with at least two bad habits. Their investigation requires Thorne to tread on the toes of DI Tugham who is not easily persuaded because Thorne’s hunch is that the killers were responsible for death that he thought cleared (the boyfriend…).

One lead is Martin Palmer (Tom Brooke), who was badly bullied when he was a schoolboy, and saved by a strange classmate called Stuart Nicklin. Another is hotel manager Sean Bracher (Leo Gregory), Palmer’s boss.

Morrissey gives Thorne a sympathetic quality that really isn’t in the writing. From the script, we know that he loves country music, has an aging father, and a soft spot for kids. He tends to plunge into an investigation in ways that can be dangerous – to himself as much as others. Morrissey says so much more with his eyes and a nod of his head.

The writers of Sleepyhead and Scaredy Cat – Dudi Appleton and Jim Keeble – throw in enough forensics and psychology to keep Thorne firmly in the twenty-first century, and enough old school maverick toughness to keep the series grounded in gritty UK cop show past.

Stephen Hopkins (Sleepyhead) and Benjamin Ross (Scaredy Cat) provide no-fuss direction. Each of the two mysteries proceeds at slightly faster than a deliberate pace. One cool thing about UK TV is that stories are allowed to take the space they most naturally fill, and such is the case here – each mystery was three forty-five minute episodes in the UK (though they are packaged as two one hundred thirty-minute movies for Encore.

Both mysteries have that cool, blues and greens palette that automatically make the viewer think of them as dark and gritty, while the forensics and psychology give them moments of detachment that contrast nicely against Thorne’s inability to remain objective.

In both cases, the casts are excellent even, no, especially when they aren’t given a lot to work with (which would be most of them, really). The actual mysteries play out in unexpected ways – especially in Scaredy Cat – and their conclusions don’t end with anything even remotely resembling ‘happily ever after,’ kind of like real life.

The two Thorne mysteries are better than average. They’re smart, unsettling and well executed. They could use a bit more character development and some humor, but they’re still better than most.

There are another nine Thorne mysteries out there – with two more in the pipe – so there’s plenty of room for the TV series to grow. With Sleepyhead and Scaredy Cat, it’s off to a good start.