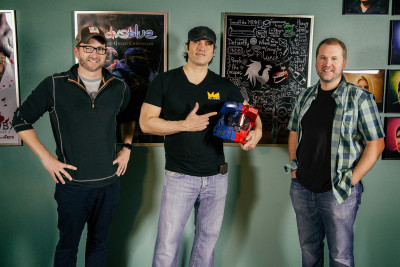 Austin, TX — Thursday, November 5, 2015 — El Rey Network will bring the award-winning, longest running sci-fi/comedy series in history, Red vs. Blue, to television for the first time. Premiering December 5th on El Rey Network, all 13 seasons of Rooster Teeth’s Red vs. Blue have been lovingly and carefully curated and formatted from the original digital shorts into 95 half-hour episodes, which will air weekend mornings from 6:00am to 10:00am ET/PT.

“I’ve been wanting to carve out an animated component to El Rey’s lineup and this was just the perfect fit for the network. Red vs. Blue is cool, quirky, badass and a little off-beat,” said El Rey Network Founder and Chairman Robert Rodriguez. “It’s a truly groundbreaking machinima series, with a strong focus on quality writing and pioneering motion capture techniques. I can’t wait for the El Rey Network audience to check out.”

“As young independent filmmakers starting out with no crew but a huge desire to make original content, Robert was a huge inspiration. So it seems incredibly fitting that Red vs. Blue will now have a home on El Rey Network,” said Rooster Teeth Founder and CEO Matt Hullum. “It’s the perfect fit for our brand of action, comedy and general animated mayhem.”

Based on the award-winning Halo® video game franchise, Red vs. Blue is a hilarious and action-packed series set in the distant future that tells the story of two groups of soldiers battling for control of the least desirable piece of real estate in the known universe – a box canyon in the middle of nowhere. Premiering in 2002, Red vs. Blue continues to grow as both a global entertainment phenomenon and popular staple of the Halo universe as it enters its 14th season.

“Red vs. Blue embodies the irreverent humor that lurks beneath Halo’s sci-fi universe but also the creativity that is at the heart of our franchise,” said Kiki Wolfkill, Studio Head of Halo Interactive Entertainment and Channel. “Rooster Teeth is a pioneer in web entertainment and machinima with Red vs. Blue, and we consider the series to be an important part of Halo’s history and future. It combines the best of Halo gaming with Rooster Teeth’s edgy humor on a network renowned for high-quality, exciting content.”

To find El Rey Network in your area please check out the channel finder at ElReyNetwork.com.