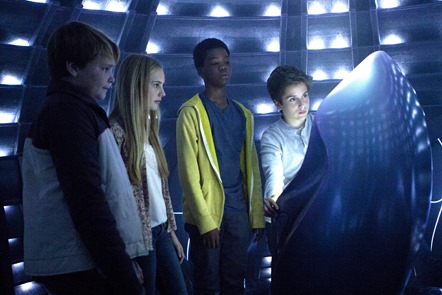 Earth to Echo is not an ET/Super 8/Close Encounters clone. It is deeply influenced by them, but takes the kids-meet-aliens premise and gives it a fresh approach that is surprisingly well thought out.

Three best friends are facing a crisis. Their neighborhood is being torn down to make way for a freeway and they will have to move to different places, so the day before they have to leave, they get together one last time. When their cell phones freak out, they figure out the image left burned into the screens is a map and set out to find out where it leads. Along the way, they run into some problems and are bailed out by a girl one of them has said he kissed.

The trio of best friends are Alex (Teo Halm), Munch (Reese Hartwig) and Tuck (Astro). In one way or another, they are nerds who’ve never really had any other friends (as Munch says, ‘I’m an acquired taste’). The girl is Emma (Ella Linnea Wahlestedt) and she is not your typical spoiled rich kid (much to the surprise and relief of the boys). She’s also the most pragmatic of the four.

About that highway construction project: the kids make a series of discoveries that lead them to the realization that it’s a cover for something else entirely – possibly because the nice guy who heads the project (Jason Gray-Stanford, Monk) turns out to be not so nice. Also, the base for the construction is not really set up for building a highway. 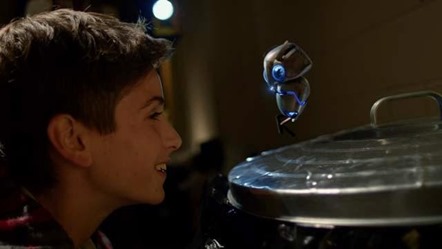 Then, of course, there’s the alien – a cute little robot-like being the kids dub Echo.

Earth to Echo produced by Disney, which then would have shelved it had it not been picked up by Relativity Media and given a bit of spruce up with a few additional scenes.

What we get is a family-friendly sci-fi flick that feels like a story told by a child – it has that one-darn-thing-after-another innocence and sense of fun. A large part of the adventure is an unusual scavenger hunt that leads to some spiffy effects and brings Emma into the story.

The fresh spin on the kids-meet-aliens tale is that the kids are documenting their last adventure together with a borrowed video camera, so there’s the feel of found footage. The result is that Earth to Echo has an immediacy that is particularly engaging. It helps that Echo looks like a wingless, metal owl – and proves to be pretty resourceful.

It’s not easy to make a low-budget film with decent effects – especially when one of your main characters is largely effects-based. Kudos to writer Henry Gayden and director Dave Green for pulling that off. It helps that the film’s casting is so good – the four kids are very good and Gray-Stanford plays against type effectively.

Earth to Echo is childlike (not childish) and a perfect alternative to the huge (and hugely boring) Transformers: Age of Extinction.