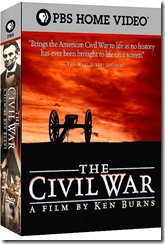 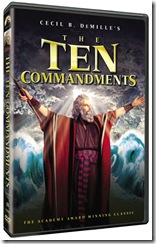 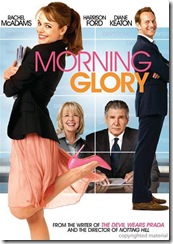 I’m playing catch-up in DVD reviews, this week, thanks to circumstances beyond my control. We’ll start with three entertaining titles from Paramount Home Entertainment: the slight, but entertaining Morning Glory; Cecil B. DeMille’s 1956 religious epic, The Ten Commandments, and the innovative documentary series that raised the bar for all documentarians since its release, Ken Burns’ The Civil War.

The Civil War: A Film by Ken Burns originally aired on PBS in the fall of 1990. It was thorough examination of the defining event of the United States of America. It took five years to complete. It also promptly gave PBS its best ratings ever.

The Civil War is a tapestry of moments and events large and small. Through the assemblage of photographs of not only the biggest names associated with the war [Liconln, Davis, Grant, Lee, etc], it also told the story of soldiers like the Confederate Army‘s Samuel Watkins and freed slave Frederic Douglas. It brought to the fore stories of women like Mary Chestnut – and treated them with the same gravity.

In its use of actors to read the actual words of those involved at all levels of the Civil War – including civilians [Sam Waterson was Lincoln, Horton Foote read for Davis, Charles McDowell read for Watkins, Morgan Freeman provided Douglas’ voice], and excepts from newspapers – it took those words and made them resonate within the minds and hearts of its audience.

Even the music was an organic part of the process in a way that had rarely been seen or heard before. Most of it was traditional music from the period, but the title theme, used throughout in various arrangements, Ashokan Farewell was written by a fiddler named Jay Ungar to express a deep sorrow/melancholy that he was feeling [check out the interviews on the DVD to learn why] and Burns felt that it suited the subject of the Civil War perfectly.

The unique way that Burns combined all those elements with knowledgeable talking heads [the most memorable of them most likely being novelist Shelby Foote] with that tapestry of photographs, letters, speeches, newspaper articles and music produced something we’d never seen before – at least not to that extent: a documentary that was not only edifying but also not boring [Burns’ earlier work, especially Huey Long, had been made with that same idea as one of its foundations]. Still, it was The Civil War that had the greatest impact on documentarians to follow because, not only was it not boring, it was popular!

Not only did The Civil War take an in-depth look at the single event that most defined a country, it showed that you could make a documentary that people would want to see. It was so far beyond what had gone before [remember those sleep-inducing docs that got shown in social studies class back in the day?], that it was, effectively, a sea change in the approach to and making of documentaries.

Cecil B. DeMille’s religious epic, The Ten Commandments is storytelling on a grand scale. The story of how Moses led his people out from under the rule of the Egyptian Pharaoh, Ramses, is one of the most colorful in The Bible.

From the baby Moses being found in a basket in the rushes, to his discovery that he is a Jew and that his people are slaves, to his becoming a prophet of God and the deliverer of his people, The Ten Commandments is one of the most genuinely timeless films ever made.

The story of Moses’ [Charlton Heston] efforts to free his people from Ramses’ [Yul Brynner] rule – bringing down the twelve plagues [including locusts, turning the Nile into a river of blood, and so forth] – is one of the most amazing looking films ever made. Many of its special effects – especially the parting of the Red Sea – still hold up well, today.

This release also features a thorough commentary by Katherine Orrison that details the film’s making; anecdotes from the set [gleaned from her time spent with DeMille’s right-hand man, Henry Wilcoxon], and some theological comments that are clearly her own.

The only other features – Newsreel footage of the New York premiere and three theatrical trailers – are barely worth checking out and, in fact, detract from the package.

Grade: The Ten Commandments – A

Morning Glory didn’t figure too highly on the Tomatometer – it’s not particularly substantial, despite trailers that suggested it might a slightly less deranged Broadcast News for morning shows in the 21st century [with a dash of romance thrown in]. What it is, is a light, fluffy comedy that deals with a workaholic morning show producer who loses her producer position on an early, early, early [4 a.m.] morning show on a cable network that has no money to speak of and finds a job with the lowest rated morning show on any network – with a little romance thrown in.

In an elevator, she meets Adam [Patrick Wilson], a producer on a more respected magazine show. In the same elevator, she meets her idol, legendary newsman [think Dan Rather] Mike Pomeroy [Harrison Ford] and proceeds to go all fangirl on him – much to his apparent distaste. Her meeting with her new show’s co-anchors Colleen and Paul [Diane Keaton and Ty Burrell] goes even less well.

Then, in her first morning meeting, she seems overwhelmed by the information and questions flying at he, but the joke is on everyone else. She snaps off a series of replies that gets everyone’s attention. Then she fires the sleazy co-anchor who’s been floating for a long time anyway.

When she finds a loophole in Pomeroy’s contract, she effectives blackmails him into taken the now available co-anchor spot on Daybreak – where he promptly refuses to do puff pieces, or say the word ‘fluffy.’

McAdams shines as the kind of news junkie/workaholic who always has one eye on the nearest TV screen and can’t get through a date with taking at least one call. Her energy and attitude, though, are so upbeat that we never give up on her – even as she’s on the verge of a relationship that she never sees coming because her ‘radar’ is so bad in that area. Maybe it’s the dimples…

The romantic arc is underdeveloped, but we accept the quick strikes with which it’s drawn because McAdams and Wilson work well together – and because her dedication to her job [even when it seems Daybreak is headed for cancellation] is so real. Surely, given the opportunity, her dedication to a relationship – once she actually realized she was in one – would be the same.

Harrison Ford should do comedy more often. His gruff, snide Pomeroy is a lot of fun to watch as he duels with Becky over his perceived dignity and professionalism. The resolution of that character arc is beautifully set up and rewarding.

In the end, though, it’s Ford and Keaton’s ‘banter’ that kicks Morning Glory out of the realm of the nice, the fun, the average. Mike and Colleen feel nothing but malice toward each other for most of the film – and that gives the film enough bite to elevate it a bit above the usual.

Attention to detail certainly helps add to Morning Glory’s verisimilitude. From the morning meetings to the actual behind the scenes goings on, the film nails the reality of producing a morning show.

Mostly, though, Morning Glory is the story of Becky’s efforts to turn around the ratings on Daybreak and the way she builds a family from the grating, bickering cast and crew that she finds when she starts.

There’s no grand message here; no attempt to say stuff. Aline Brosh McKenna’s script leans more to the laugh than the character beat, but does give us enough character beats so that we get to know the characters well enough that we know when to laugh. Roger Michell keeps moving at a frenetic pace – especially when Becky is in full operation mode – that the script’s weak spots [like the lack of development in the Becky/Adam romance] are carried by the actors’ chemistry.

Morning Glory made me laugh a lot. Even on DVD, months later, it still does.

What a pity the DVD extras consist of one deleted scene and an uninteresting commentary track.