When Watchmen was released, I wrote, “Watchmen is beautiful and brutal. It is an experience. Snyder has put together a thoughtful, nearly anthemic work here. There are various small changes and one major one [the pan-dimensional, intergalactic space squid is not here – and that’s a good thing] in the film, but the essentials are intact: the politics, the hovering of Armageddon, the nature of the characters, and the philosophical foundations for all of the above.” 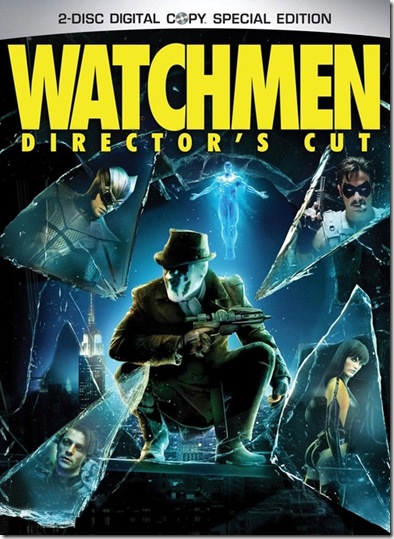 The one thing that the Director’s cut DVD gets right is the addition of twenty-four minutes of footage that were removed to make the film as commercial as possible [once a studio fronts nine figures for a film, you have an obligation to try to get that money back]. The key scene, for me at least, is the death of the original Nite Owl [Stephen McHattie] and the current Nite Owl’s response. The combination of these two scenes show us how human most of the movie’s costumed characters are – and how distanced from the rest o humanity Rorschach is. The returned footage adds more depth to a theatrical cut that was already pretty accomplished.

Even now, though, with its director’s cut, this Watchmen isn’t complete. Stay tuned for the Ultimate Watchmen coming to stores sometime soon. It will likely have The Black Freighter edited back into the film.

Where the DVD breaks down is the features. The content on the bonus disc clicks in at under forty-five minutes. What do you get? A featurette, “The Phenomenon: The Comic That Changed Comics;” 11 Videologs [already seen on the internet]; the music video for My Chemical Romance’s version of Desolation Row and, oh, yes, a digital copy of the film.

The featurette is a pretty good look at the impact Watchmen had on comics, even without the presence of Alan Moore. In fact, it’s quite fine – until it reaches the final segment, The Unfilmable is Filmed, when the speakers talk of Watchmen’s continued relevance but don’t say much about the actual filming. Huh?

The eleven vidoelogs address virtually every aspect of filmmaking, but again, most the film’s target audience has seen them. And I’m not exactly sure how the Desolation Row video fits here – the video has nothing to do with the film – though it would’ve been easy enough to edit the performance clips around the relevant scenes from the film.

Overall, once you get past the twenty-four minutes of returned footage, you’ve about a half-hour of new material – and most of that is about the graphic novel. Special edition, my @$$!