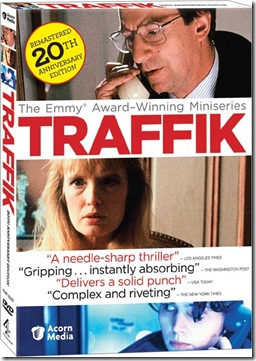 Helen Rosshalde [Lindsay Duncan] is left to fend for herself when her husband, Karl [George Kukura] is arrested for smuggling drugs. In an effort to avoid bankruptcy, she decides to carry on Karl’s business. This leads her into dealing with a Pakistani drug kingpin, Tariq Butt [Talat Hussain]. Poppy farmer Fazal [Jamal Shah] sees his fields burned and – through pure luck – manages to secure a position working for Butt.

Traffik won all those awards because it was the first television program to go so far beneath the surface of the drug trade – and show how seemingly fruitless it was for governments and police to pit a dent in it. Also, it gave us a gritty look at the effects of the drug trade on those who worked in it; worked to curtail it, and those who became the victims of it.

Jack, for instance, finds that his efforts on his government’s behalf affect his relationships with his wife and daughter. Fazal moves from being a poor farmer to a position of comparative wealth, but becomes overconfident. Caroline spirals further and further into her own personal hell.

The mini-series is deliberately grainy, adding a documentary feel to the story – giving it more impact because it looks more real and natural. Simon Wood’s writing maintains an even pace which heightens our perception of the details he includes. Alistair Reid’s direction emphasizes the human cost that Wood’s script detail. Between them, Wood and Reid create a piece that brings the impact of the drug trade into sharp focus by juxtaposing Caroline’s growing addiction with sequences that show the heroin’s origins, from field to street. These arcs are then juxtaposed with events that change the lives of Jack and Fazal.

The result is a harrowing journey that has become a television classic.

Features: the Extended U.K. Broadcast Version of Episode 6: The Courier, and an interview with Wood and producer Brian Eastman.