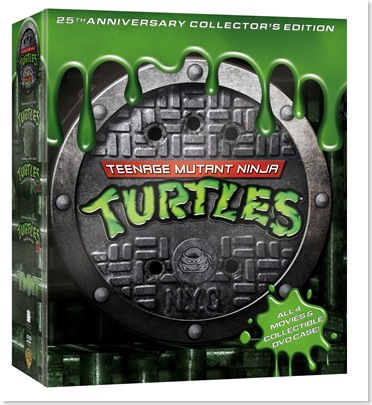 The Teenage Mutant Ninja Turtles are having a totally bodacios Shell-a-bration this year as they mark the 25th anniversary of their arrival on the cartoon scene back in 1984. DONATELLO, LEONARDO, MICHELANGELO and RAPHAEL (all named after famous painters) along with their sensei MASTER SPLINTER, human companion APRIL O’NEAL and evil nemesis SHREDDER drop-kicked and karate chopped their way in comic books and then on to Saturday morning cartoons and big screen movies and soon became a hit with children, teens and adults alike.

To help promote this auspicious occasion for America’s best loved green-shelled good guys, Warner Brothers Home Entertainment has released a collector’s edition DVD and Blu_Ray set that rocks with goodies and turtle treasures. The specially packaged 4 movie set includes TMNT classics as Teenage Mutant Ninja Turtles:The Movie (which was the highest-grossing independent film of all time when it was released and the fifth highest-grossing film worldwide of 1990), Teenage Mutant Ninja Turtles II: Secret of the Ooze, Teenage Mutant Ninja Turtles III: Turtles in Time and CGI hit, TMNT (the #1 film in the U.S. on its opening weekend). All four movies are high quality re-releases that show how well the concept of these heroes and the message they bring stand the test of time.

This 25th Anniversary collector’s edition is more than just about re-releasing movies, it also includes such radically cool items as a TMNJ collector’s comic book, sketch with Turtles co-creator Peter Laird’s autograph, a beanie hat and 8 TMNT character cards all brought to you in a specially designed DVD packaging that is exclusive for the 25th anniversary.

Since their introduction in 1984, The Turtles have established themselves as a true “evergreen” brand and pop culture icons. Twenty-five years later, they’re also being enjoyed by a new generation of fans through their animated TV series, Teenage Mutant Ninja Turtles: Back to the Sewer, airing Saturday mornings in TheCW4Kids block on The CW Network. From their home in the storm sewers of Manhattan, Leonardo, Donatello, Michelangelo, and Raphael battle petty criminals, evil megalomaniacs, and alien invaders, all while remaining isolated from society at large. The Turtles’ bravery and humor continue to resonate with audiences as the four heroes in a half-shell maintain their status as beloved global icons with no end in sight to their pizza-loving, crime-fighting ways.