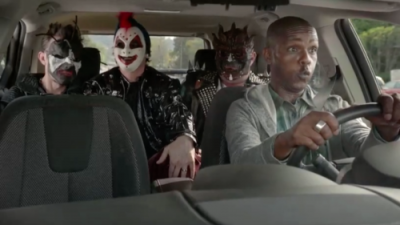 Drive Share stars Scheer and Huebel along with a guest cast of comedians who explore the awkward, bizarre and outrageous situations that strangers find themselves in just trying to get from point A to point B.  Remember how they outlawed hitchhiking?  Well, this is more dangerous!

“I know this is the part of the press release where we are supposed to say something pithy but I’m really drawing a blank, so I’ll just say this might be the most accessible and important comedy show ever to be seen! Even more than Scandal,” said Scheer.

“Finally a show that makes fun of the dude who picks me up and thinks that we’re gonna be friends because he knows where I live. That’s not how friendship works, Steve. Please stop calling me,” added Huebel.

“Rob and Paul and everyone in Drive Share shows us exactly what can go wrong when strangers rideshare together, and it’s comedy gold,” said Justin Killion, Head of Premium Programming and Development, Complex Networks’ Seriously.TV. “We’re thrilled to be working with the entire team; it’s a perfect fit for our audience on Seriously.TV.”

“We are huge fans of Rob and Paul who, with Executive Producer Jonathan Stern, are pioneers of the multi-platform, and comedic content space with hits such as Burning Love, NTSF:SD:SUV, and Childrens Hospital,” said Ivana Kirkbride, Chief Content Officer at go90. “Rob, Paul, and the entire creative team have done it again, and we’re thrilled to bring this brilliant comedy to the go90 audience.”

Drive Share is created and directed by Rob Huebel and Paul Scheer and written by Rob Huebel, Paul Scheer, and Scott Sonne. The series is executive produced by Sheer and Huebel; Jonathan Stern and Keith Quinn for Abominable Pictures; Justin Killion and Corey Moss for Complex Networks’ Seriously.TV; and overseen for Insurrection Media by Deborah Henderson.

Drive Share is the latest series from Complex Networks’ Seriously.tv in a growing line-up of high profile shows that also includes Thanksgiving created by Dan Powell and Bethany Hall and starring Chris Elliott and Amy Sedaris; and Embeds, from Megyn Kelly, and Michael DeLuca.

Complex Networks, formed from the joint acquisition of Complex by Verizon and Hearst, is a global lifestyle brand and media company and one of the most influential voices in popular culture today. The media company generates over 500 million video views a month across its digital channels and is a top ten publisher in the U.S. when it comes to social engagement on channels like Facebook and YouTube.

Complex Networks recently launched Rated Red and Seriously.TV to distribute a growing slate of original programming on Verizon’s go90. Through its vertical brands including Complex, Collider, First We Feast, Pigeons and Planes, Ride and more, Complex Networks is at the center of music, art, street style, action sports, and entertainment reaching the coveted 18-24-year-old male audience. Last year, the company hosted the successful ComplexCon in Long Beach, attracting top brands and over 20,000 attendees to the two-day cultural festival.

go90 is a free, mobile-first, social entertainment platform that makes it easy to discover, view and share content from the most beloved networks, distributors, creators, audiences and brands in digital entertainment. Available on the web, iOS and Android, go90 brings together and delivers premiere entertainment experiences across every screen. go90 is part of the Verizon Communications family of companies. Start watching now on go90.com.