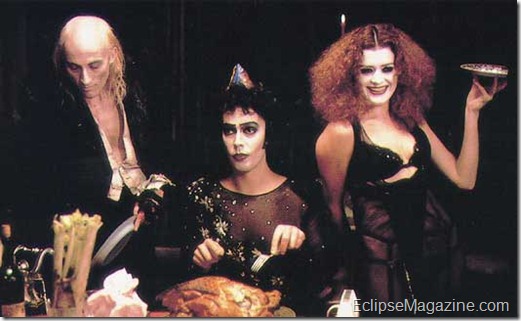 A movie that transcends the ability to properly review it, The Rocky Horror Picture Show is finally out on Blu-ray. I’m sure phrase, “It’s so bad it’s good,” was invented for this movie. Sure Ed Wood probably set that bar, but The Rocky Horror Picture Show; well, there are very few words that can describe the campy good time you can have watching this movie. Most people used to criticize the music of the show, or were too ashamed to admit how good it actually was.

Ok, good may be a stretch, but I’ve always personally loved the music. I mean come on, “Touchy, Touchy, touch me, I want to be Dirty!” The CBS Television show – The Closer pulled off an absolutely amazing episode dedicated to The Rocky Horror Picture show. That’s how culturally significant the Rocky Horror Experience is/was in pop culture. If that’s not enough Glee did a themed Rocky Horror Episode a few weeks ago.

I remember the first time I saw it – it was when I was at College in New Jersey (the forgotten years) and I was part of the school’s Entertainment Planning Board. Someone brought up the idea of showing Rocky Horror, my response was wha??? Never heard of it, I said. People explained the experience to me and I still didn’t get it.

How do you review a movie like this? If I’m honest it really is bad, but it’s so over the top that it crosses that camp threshold and becomes awesome. It’s also hard to separate the movie from the fond memories of the experience.

I criticize Fox Home Video a lot for how they handle their Blu-ray properties, but god bless, em they keep on trying. The video transfer for Rocky is beautiful! The opening black and white wedding scene is sharp you can see the glisten and shine on Brad’s (Barry Bostwick) hair and the smoke come out of his mouth after they get rained on. I’ve never seen a Rocky print this clean. The audio has been completely remastered and is now in 7.1 DTS HD. There’s a 2.0 Mono Track. Language tracks are in an odd choice of Portuguese and Polish. There are over 20 different subtitles on this disc. 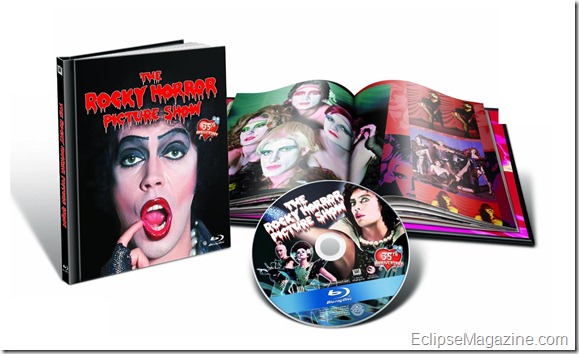 The Blu-ray comes in a really nice Blu-ray book packaging. The Mini-Book includes full color photos by Mick Rock with the single disc Blu-ray sitting in the middle of it. The onscreen navigation is clutter free and straight forward to use.

It includes the UK and English version of the movie, an alternate Black and White opening (I definitely prefer the Color version), a full length commentary track from Richard O’Brien and Patricia Quinn; there’s a lip syncing track for those of us who like to sing and a really cool feature called The Midnight Experience. The Midnight Experience let’s you select up to 4 components that include a Trivia Track, Vintage Callback Track (Unrated Version), The Prop Box and a live Picture in Picture Show that includes the Stage Performance. It’s a pretty amazing extra that goes a long way towards showcasing what the Experience was like.

There are some nice vintage featurettes from the old DVD release including deleted scenes, clips from the 10th Anniversary Celebration, a Photo and Poster Gallery, Alternate Endings, original Trailers, the Time Warp Music Video from the 15th Anniversary Release and more.

If I had to nitpick (and I do) – the call out track is pretty lame because it’s not the real audience participation track, all it does is give you the prompts and the live theater show is silent, which is how it was in the live theater as well, but it seems a little odd watching it.

I’m a little disappointed that there’s no Digital Copy for this.

I’m a sucker for bad, campy movies, so I’ll always love The Rocky Horror Picture show for what it is and the Folks at Fox Home Video does a really good job of reviving this for Blu-ray and gives Rocky fans just about everything you would want from a release like this.