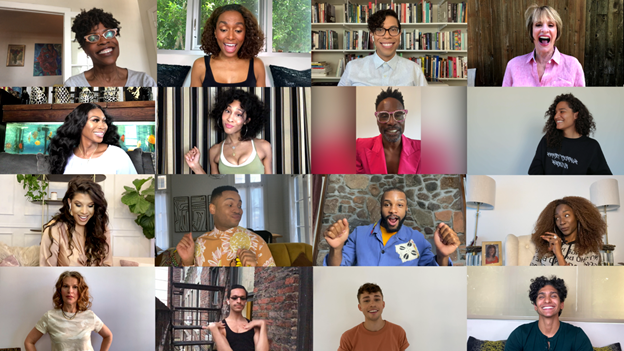 Billy Porter and Mj Rodriguez, along with the cast and producers of “Pose” will come together for a one-hour commercial free virtual event in partnership with GLSEN, Hetrick-Martin Institute, and Transgender Legal Defense & Education Fund.

DISNEY TELEVISION STUDIOS AND FX PARTNER TO PRODUCE “POSE-A-THON,” A ONE HOUR EVENT TO ENTERTAIN AND INFORM IN HONOR OF PRIDE MONTH STARRING THE CAST AND PRODUCERS  OF THE GROUNDBREAKING DRAMA SERIES “POSE”

Billy Porter and Mj Rodriguez, along with the cast and producers of “Pose” will come together for this one-hour commercial free virtual event in partnership with GLSEN, Hetrick-Martin Institute, and Transgender Legal Defense & Education Fund

“I’m so proud of our cast and producers for coming together to present an uplifting hour of song and stories,” said co-creator, executive producer, writer, and director Steven Canals.  “In the spirit of ‘Pose,’ our goal is to celebrate joy, love and, of course, pride, from our family to yours.”

Executive producer, writer, and director Janet Mock added, “Since we’ve been unable to shoot the show we love, we jumped at the chance to reunite our ‘Pose’ family and partner with the studio and network to raise spirits and awareness about the plight of LGBTQ+ people of color during such a turbulent time.  This Pride month special is a commemoration of our forebears’ efforts, a memorial for trans lives lost, and a celebration of the life-saving work of LGBTQ+ organizations.”

GLSEN envisions a world in which every child learns to respect and accept all people, regardless of sexual orientation, gender identity, or gender expression.  Each year, GLSEN programs and resources reach millions of students and educators in K-12 schools, via action at the national, state, and local level.  Over three decades of work, GLSEN has improved conditions for LGBTQ+ students across the United States and launched an international movement to address LGBTQ+ issues in education and promote respect for all in schools.

Hetrick-Martin Institute (HMI) believes all young people, regardless of sexual orientation or identity, deserve a safe and supportive environment to achieve their full potential.  They offer basic and emergency support, mental health counseling, job readiness training and arts and culture programming for thousands of LGBTQ+ young people and their families living in the New York and New Jersey metropolitan area.  HMI also partners with House Lives Matter, a home-grown peer leadership and advocacy project that promotes wellness, quality of life, rights and resiliency among youth and adults in the House Ball Community and mobilizes members from different Houses and regions across the U.S. around a shared advocacy agenda.

Transgender Legal Defense & Education Fund is committed to ending discrimination based upon gender identity and expression and to achieving equality for transgender people, particularly those most pushed to the margins.  They are leading the charge on a number of fronts with cutting-edge litigation to advance legal precedent, providing life-changing legal services, and spearheading critical initiatives like the Trans Health Project to transform the legal landscape and protect the rights of transgender and non-binary people across the country.

Starting Monday, June 22, the public can visit www.poseathon.com to learn more about each organization and ways to get involved.

Award-winning “Pose” is a drama spotlighting the legends, icons and ferocious house mothers of New York’s underground ball culture, a movement that first gained notice in the late 1980s.  Making television history, “Pose” features the largest cast of transgender actors in series regular roles and also features the largest recurring cast of LGBTQ+ actors ever for a scripted series.  New episodes from the third season of “Pose” coming soon on FX.