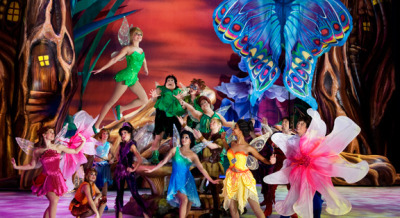 Feld Entertainment’s action-packed ice spectacular, Disney On Ice presents Worlds of Fantasy Presented by Stonyfield YoKids Organic Yogurt,  whisks audiences on a captivating adventure to four magical locations, including the auto-racing terrain of Cars and a visit to Andy’s bedroom for some fun with the stars of Toy Story 3. This production delights audiences with a journey under the sea to Ariel’s world from The Little Mermaid and then into the mystical land of Pixie Hollow for a presentation of Tinker Bell.

“To be the first to introduce the Tinker Bell story live on ice and to be entrusted with the beloved Toy Story characters is incredible, and we are thrilled to bring these heartwarming tales to families across the United States,” says producer Nicole Feld.

“The arena instantly transforms into Pixie Hollow as we show our audience how the fairies prepare for spring with an explosion of color. To convey the world of the toys and create the proper toy-to-human scale, we manipulated the size of the props and costumes to make live skaters – and even the audience – seem toy size,” she adds.

The on-ice excitement begins when an adventurous Mickey Mouse embarks on a journey with Minnie Mouse to uncover each world of fantasy, but the plan goes awry when their cherry red roadster unexpectedly breaks down.  Although Donald Duck and Goofy try, it takes the assistance of the coolest cars on the ice to get the pistons firing again.  Direct from Radiator Springs, Mater, Lightning McQueen and Sally speed into action, zipping and zooming around the frozen highway in an effort to re-energize the roadster.

The life-sized Cars characters were developed by the innovative minds of the prop team led by Feld Entertainment vice president of scenic elements Rick Papineau.  Each car took 2,000 man hours to build and is outfitted with custom animatronics including blinking eyes and hydraulic lifts that bounce to the beat of the music.  Mater and McQueen even come complete with moving mouths, enabling their dynamic personalities to shine through each time they speak.  “The cars are going to be a big surprise because no one will expect them to be so animated, so large or so realistic,” says Papineau.

As Mickey and Minnie’s “road trip” continues, production designer Jeremy Railton’s whimsical scenery transforms the arena into an environment that captures the essence of each unique world to follow.  Fluorescent coral and clam shell drums embody Ariel’s world in The Little Mermaid and audiences enter the colorful fantasy land of fairies for the Tinker Bell segment.

Railton took particular care with Pixie Hollow.  “Audiences are still getting to know Pixie Hollow, so it was important to me to capture the lushness and the scale detailed in the film,” says Railton.  Because fairies are miniature in size, Railton used inflatable technology to create a giant tree backdrop.  In the finale, larger than life butterflies float onto the ice as oversized inflatable flowers bloom around the ice signifying the arrival of spring.

From salsa dancing fish to the tumbling animal fairy, Emmy Award®-winning choreographer Sarah Kawahara combined dance, athletics and theatrics to add to the excitement and energy of the show.  She applies her versatility to familiar and memorable scenes as Ariel and Prince Eric realize their love and skate a lyrical duet to “Kiss the Girl.” To choreograph the skating in the Tinker Bell segment, Kawahara looked to the individual personalities of the different fairies. “Disney is very detailed about the types of personalities and voices they have,” Kawahara says of the nature fairies.  “I tried to find a signature style of skating and movement for each character.” For example, Iridessa, the perfectionist light fairy, skates in long, clean lines, whereas Rosetta, the “southern belle” garden fairy moves with very precise feminine mannerisms.

Costume designer Cynthia Nordstrom’s creative designs add to the feel of fantasy on ice. “In this eclectic presentation of Disney worlds, I wanted each to have a different quality,” says Nordstrom, whose costumes can be seen in Off-Broadway productions and in major theme parks around the world.

In The Little Mermaid, Nordstrom used a range of stretch fabrics to create amazing color that flows from one palette to the next; aquas melt into greens, and purples transform into hot corals and reds.  For the Tinker Bell section, “it was all about taking simple and recognizable elements from the movie and translating them into fabric.”  The green tinker fairies wear clothing in “hearty leaf” fabrics of satins and velvets, whereas Silvermist and her water fairies don sheer chiffons that float with a hint of sparkle.

For Nordstrom, the underlying concept for the lead fairies was that each girl had an “inner sparkle” that glimmered through her clothing.  For example, Rosetta, the garden fairy, wears a skirt of velvet roses with an under layer of sparkling red sequins.  The designer says, “I really enjoyed the great challenge of making the new Disney fairies from the movie come to life.”

The first act of the show is complimented with lighting that sets the tone for each scene with designs from Emmy Award®-winning lighting designer Peter Morse.  Instead of one central theme, he created three different environments to help portray the various stories that are being told in the show.

Morse creates images of waves with deep blues and greens, and palm fronds and flowers dancing across the ice with lush greens in Pixie Hollow. With patterns, lighting and color, he enhances the magic of each fantastic world.  Morse says, “Disney On Ice presents Worlds of Fantasy uses all new automated lighting fixtures so we can create infinite color and a variety of environments; it’s a great asset for a show with as many different scenes as this one!”

The toys are back in town! The second act of Disney On Ice presents Worlds of Fantasy Presented by YoKids brings together all of the fun, humor and warmth of the beloved Disney/Pixar film Toy Story 3. Woody, Jessie, Buzz Lightyear and the rest of the familiar gang hit the ice for the ultimate Toy Story experience. A completely different creative team put together the lighting, costumes and tailor-made choreography for this high energy segment of the production.

The Toy Story 3 skating was orchestrated by veteran Cindy Stuart, who worked as associate choreographer on the original Disney On Ice production of Toy Story in 1996. “It’s been so much fun for me to get back with those original characters and for us to add the new characters that they have in the film,” Stuart says. She included diversity and versatility in the production numbers, incorporating tumbling toy hijinks as Buzz, Woody, and Jessie showcase their skills in several high energy routines.

Designer Scott Lane wanted to create a fun homage to the Toy Story 3 film with his costumes. “What makes the toy costumes so unique is that many of the surfaces are plastic. We tried to achieve that kind of shiny molded feeling because toys are a physical thing that every child knows and understands,” Lane says. “The audience can expect to see a lot of color and fun textures.”

Alex Reardon contributed his lighting design expertise to the Toy Story 3 segment. “When you’re dealing with an animated movie you have a lot of primary colors. So, I was looking for ways to increase the excitement by adding lighting. Part of the job of the lighting designer is to contribute to the drama of the story.”

Disney On Ice presents Worlds of Fantasy Presented by YoKids offers the perfect combination of elements for fans of Disney On Ice. “From the contemporary feel of Cars and Toy Story 3 to the timeless quality of The Little Mermaid and Tinker Bell, audiences will see four completely different Disney world’s brought to life,” says producer Kenneth Feld. “All of this provides a value that is truly unparalleled in the world of live family entertainment.  More than ever before, there’s something for everyone.”

To discover more about Disney On Ice Presented by Stonyfield YoKids Organic Yogurt, log on to www.disneyonice.com, or visit us on Facebook and YouTube. Members of the media are encouraged to visit the Online Media Guide at http://www.feldentertainment.com/WorldsOfFantasy

Ticket Information: Tickets for Disney On Ice presents Worlds of Fantasy at Verizon Center from February 11–16 are $85, $55, $30 and $20 (plus applicable service charges) and go on sale December 29 at 10 a.m. Tickets will be available through all Ticketmaster outlets including the Verizon Center box office, online at www.ticketmaster.com and via Phonecharge at 1-800-745-3000. Group Sales are available by calling 202-661-5061. Accessible Seating is available for patrons with disabilities by calling 202-661-5065. Visit www.verizoncenter.com for more details.