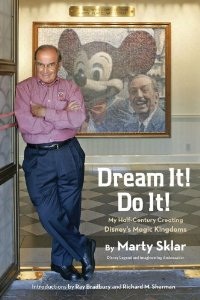 Disney Legend Marty Sklar was on hand to promote his new book Dream It! Do It! My Half Century Creating Disney’s Magic Kingdoms. Born in New Brunswick, New Jersey started fresh out of college and eventually rose to become president and principal creative executive of Walt Disney Imagineering. These are the people who are dream and build Disney Theme Parks, Hotels, and other cool Disney stuff.

In 2001, Sklar was recognized as a Disney Legend and was the second recipient of the Themed Entertainment Association’s Lifetime Achievement Award. Sklar serves as president of Ryman Arts, whose Ryman Program for Young Artists honors the late Herb Ryman, an artist, designer and fellow Disney Legend.

His charming presentation consisted of previews of Chapter Titles from his upcoming book, video clips of Walt Disney and a cool behind the scenes tour of the Imagineering central. Everything they designed is inspired by the story they want to tell.