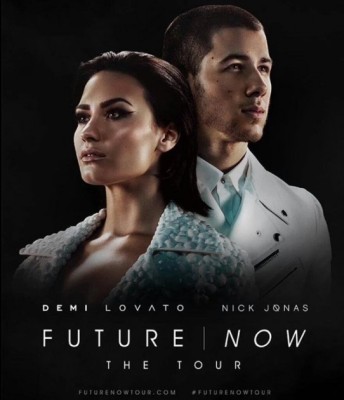 Everyone here knows of my irrational love of Demi Lovato. I saw her 4 times last year (that I gasp, paid for) and had several opportunities to interview her but could never make it work. Gah! I’m proud of myself for talking to Wilmer at SDCC without asking about Demi (I’m a professional you know). Anyway, Demi Lovato and Nick Jonas have teamed up for their next national tour. The Future Now tour is coming to DC’s Verizon Center July 26th – jeeze, I can’t plan that far ahead. Tickets go on sale Sat. Nov 7th with pre-sale on Nov 3rd.  Demi will be on Good Morning America, Thursday Oct 29, and the tonight show Oct 30th.  The full court press to promote her new album Confident is in full swing.

Multi-platinum selling music artists, Demi Lovato & Nick Jonas, invite you to experience FUTURE NOW: THE TOUR. The North American tour, produced by Live Nation, will kick-off on June 24, 2016 as the two influential entertainers join forces for what will be one of the year’s most anticipated summer music events. FUTURE NOW: THE TOUR will visit over 40 cities throughout the U.S. and Canada including stops in New York City, Los Angeles, Toronto, Montreal, Chicago, Washington, D.C., Las Vegas, Vancouver and more. A full list of FUTURE NOW: THE TOUR dates is below.

Demi Lovato’s newest album, CONFIDENT, is out now on Hollywood Records/Island Records/Safehouse Records and features the #1 iTunes smash single “Cool For The Summer.” Lovato kicked-off the release of CONFIDENT with powerful and poignant performances on “Saturday Night Live,” which generated the #1 worldwide trending topic on Twitter and massive coverage by the media. Following the performance, the Village Voice declared, “Issue a warrant for Demi Lovato ‘cause girl murdered ‘Saturday Night Live,’” adding, “Lovato’s full-throttle vocal assault on the Studio 8H stage with (“Confident”) could service as a career standout for her.”

Demi will perform songs from the critically acclaimed new album on “Good Morning America” (Oct. 29) as well as “The Tonight Show with Jimmy Fallon” (Oct. 30). Critical praise for Lovato’s CONFIDENT has been equally stellar. Billboard Magazine asserted, “Demi Lovato has become one of pop’s leading motivational figures,” while People Magazine lauded, “It’s Lovato’s dynamite vocals and striking vulnerability on aching ballads and gospel anthems that make CONFIDENT such a triumph,” and USA Today avowed, “She inarguably has one of the strongest instruments in pop right now.”

Island Records Artist, Nick Jonas introduced himself as a fully formed solo artist on his hit self-titled debut, released in November 2014. The critically-acclaimed album includes double-platinum smash single and #1 U.S. radio hit, “Jealous” and his sultry second chart-climbing radio single, “Chains.” Jonas attributes his album’s darker overtones partially to the fact that while he was recording, he was also shooting the gritty television show ‘Kingdom’ — a mixed martial arts drama that premiered on DirecTV’s Audience Network last fall and was recently picked up for two additional seasons. Jonas recently earned two more high-profile roles, a guest starring role in Fox’s horror-comedy series, ‘Scream Queens’ and a lead in the James Franco produced film, ‘Goat’. Showing no signs of slowing down this year, the breakout solo powerhouse joined forces with west coast rapper-producer Sage the Gemini to release their summer collaboration, “Good Thing.” Jonas’ latest single, “Levels,” has already amassed over 12 million views on YouTube and is rapidly climbing the Billboard Hot 100 chart. He also recently wrapped up his sold-out North American “LIVE IN CONCERT” tour and has been nominated for a 2015 American Music Award for Favorite Male Artist – Pop/Rock.

*All dates, cities and venues below subject to change.

Join the conversation at #FutureNowTour