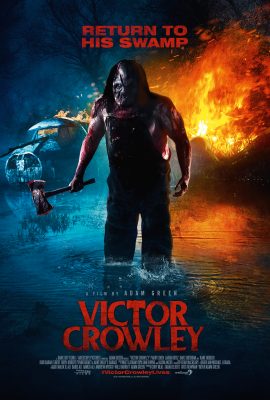 Victor Crowley is the fourth movie in the Hatchet series.

It finds Andrew Yong, the only survivor of Crowley’s rampage, lured back to the swamp after he’s offered $600,000 for a network special. Chaos (and blood) ensues.

Victor Crowley will be released on VOD, Digital and Blu-ray and DVD on February 6th.

VICTOR CROWLEY
FAN-FAVORITE SLASHER FRANCHISE WILL BE RELEASED ON VOD AND DIGITAL on FEBRUARY 6, 2018

Dark Sky Films has announced the official release date of VICTOR CROWLEY, the surprise fourth film in the fan-favorite Hatchet franchise. The film will be released on VOD, Digital and Blu-ray and DVD on February 6, 2018. Kept tightly under wraps for over two years, the slasher reboot unexpectedly debuted this past August. The highly anticipated release was shown in theaters across the country in October as part of the “Victor Crowley Road Show.”

In 2007, over forty people were brutally torn to pieces in Louisiana’s Honey Island Swamp. Over the past decade, lone survivor Andrew Yong’s claims that local legend Victor Crowley was responsible for the horrific massacre have been met with great controversy, but when a twist of fate puts him back at the scene of the tragedy, Crowley is mistakenly resurrected and Yong must face the bloodthirsty ghost from his past.