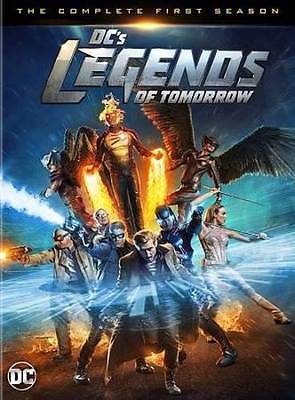 It took a few episodes to find its feet and, for whatever reason, I stayed with it until it all came together – and I’m glad I did because it came together really well.

The first four or five episodes found the show’s cast and creators discovering which characters worked well together/which members of the cast had what kind of chemistry – the best example of found chemistry is the trio of brawlin’ carousin’ terrors that were Leonard, Mick and Sara. I’m betting that no one saw that coming – nor the big/little brother vibe between Mick and Ray though the romantic vibe between Ray and Kendra seemed pretty much obvious from the first episode.

While figuring out which parts of the show worked best and who played of whom in what ways, the writers gave us the history of Vandal Savage and the Hawks, which may not have boded well for Ray, it did create an added layer to the story – as did the contentious initial relationship between Martin (Dad) and Jax (surrogate rebellious son).

The first season really began to cook just as the first part of the season ended with a bang at the end of episode 8, Night of the Hawk, when Ray and Kendra were stranded in the ‘50s living as husband and wife across the street from Savage!

By then we’d seen what Rip’s future looked like; watched an effort to undermine Savage’s progress by attacking his finances; been in an ‘80s Soviet Gulag and seen a future Arrow/Oliver Queen.

As the show progressed, we also got to see more and more convincing CGI work and some pretty impressive stuntwork (a barroom brawl with Leonard, Mick and Sara taking on a bar full of bikers was a high point). The writing began to peak as the writers began to play to their cast’s strengths and the plots got more and more adventurous.

The first season hit perfection for the first time on episode eleven, The Magnificent Eight, in which Rip and the gang hide out from Time Masters’ mercenaries in the old west – and run into DC’s classic western character Jonah Hex (Jonathan Schaech).

The episode was a turning point for Kendra as she learned something about herself from a highly unlikely source – and the Legends helped a town overcome oppression (and saved an important sick kid’s life).

By the end of the season, someone had died; someone had left the team, and we’d learned a ton about rip (and met his foster mom – guess where his various less than appropriate skills were first harnessed…).

Over the course of the season, no two episodes were alike – time periods varied; tones varied; characters grew and fun was had. The show could go from a nuclear thriller to a Gulag drama; from a western to a dystopian future – and did.

Under it all lay a sweet goofiness that kept the most dramatic eps from being overbearing and made the silliest eps palatable – and we learned why Rip really recruited the characters he chose. Then there was that final scene…!

By the end of its first season, DC’s Legends of Tomorrow became a solid, entertaining hour – and a show that promised to reinvent itself every time out. It’s really all over the map – in a good way!

Where the first season DVD set comes a cropper, though, is in its bonus material. No audio commentaries and no real look at the how the show was made – just five brief featurettes.

Plus a four page foldout listing episodes, directors and writers.

Grade: DC’s Legends of Tomorrow: The Complete First Season – B+