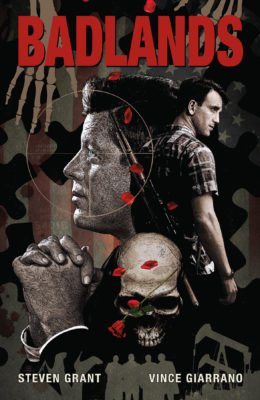 Steven Grant and Vince Giarrano’s crime drama Badlands is the fictional depicting of events leading up to the assassination of JFK and examines the question of whether there was a second shooter.

Dark Horse is releasing a new edition of the long out of print Badlands – with a new cover by Tim Bradstreet – on March 14, 2018. Pre-orders are now being taken.

VENTURE INTO THE “BADLANDS”

MILWAUKIE, Ore., (September 21, 2017)—Dark Horse is thrilled to present a new edition of Steven Grant (2Guns, The Rook) and Vince Giarrano’s (Terminator) Badlands! Originally published in 1992 and long out of print, this second edition features a brand new cover by Tim Bradstreet.

Badlands is a fictional crime drama that depicts the events leading up to the assassination of JFK and examines the longstanding question—was there a second shooter?

Conrad “Connie” Bremen is an ex-con carrying the stench of a sordid, secret past. Connie just wants to get on with his life, but he’s attracting the attention of all the wrong people: the mob, the CIA, and the FBI, just to name a few. They all have plans for Connie, whether he likes it or not—and some of those plans include the murder of a president. For Connie Bremen, the road to Dallas begins and ends here, in the Badlands.

The new edition of Badlands goes on sale March 14, 2018, and is available for pre-order on Amazon, Barnes & Noble, and at your local comic shop. Visit DarkHorse.com for more information.