Al Pacino stars as Danny Collins, living the life of a once great rock superstar who burned out long ago and fuels his drugs and sex with the money earned by singing the biggest hit he ever had – Hey Baby Doll – to arenas full of aging (mostly female) fans. The resemblance to Neil Diamond is probably intentional, though Diamond has considerably more memorable hits.

Pacino dives into the role, though, and really sells the former rock god who just might be as unnaturally preserved as Keith Richard. Collins is engaged to a nineteen year old golddigger (who’s screwing around on him); can’t go onstage without being high (that’s how much he loathes his playlist), and drives his manager/best friend, Frank Grubman (Christopher Plummer) crazy.

Then Frank gives him a unique birthday present.

Back in the sixties, Collins did an interview with a Rolling Stone-like magazine in which he was asked if becoming famous and making tons of money would affect his writing. He replied yes. John Lennon read the interview and wrote to him – in care of the magazine – to tell him it didn’t have to be so, but the magazine publisher never forwarded the letter. It became a big collector’s item and Frank found out about it and bought it for Danny.

When he reads the letter, Danny has an epiphany, cancels the rest of his tour and heads off to New Jersey where he gets a hotel room, buys a baby grand and starts writing – while also flirting with the hotel manager, Mary Sinclair (Annette Bening), and nudging the hotel valet, Nicky (Josh Peck) and desk clerk, Jamie (Melissa Benoist) into dating.

But he has another reason to be in Jersey – a son he’s never met, Tom Donnelly (Bobby Cannavale). Tom has a pregnant wife, Samantha (Jennifer Garner) and four-year old daughter, Hope (Gisele Eisenberg). He hopes to become a part of their lives, but Tom isn’t so keen on that. 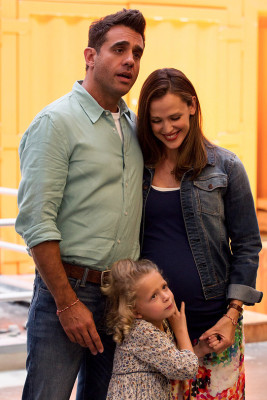 Written and directed by Dan Fogelman (Galavant, Crazy Stupid Love), Danny Collins would be a pretty standard redemption tale of the ‘too little, too late’ school if not the keenly observed characters – and the crackerjack cast.

It turns out there is a reason for Tom to let Danny into his life and, though it could have come soap-ish, the delicacy with which the situation is developed – and Cannavale’s perfect mix of toughness and vulnerability makes it work. Plus, Frank is very persuasive when he says Tom at one point, ‘He’s got a big heart. Half the time it’s stuffed up his @$$, but he’s got a good heart.’

Garner does ridiculously good things with what is a minor supporting role. Her Samantha is as tough as Tom and as vulnerable but possibly even more determined.

Another key to the movie’s success is the chemistry between Pacino and Eisenberg. Danny is immediately a great grandfather and Hope is thoroughly smitten by him. Eisenberg’s may be the key performance in the film – she gives a beautifully modulated performance. There’s a moment when she gets on Danny’s tour bus and as the camera fixes on Tom, Samantha and Danny outside, we hear her exclaim gleefully, ‘It’s got a bathroom!’

It’s such a perfect kid moment that it stayed with me (it’s been a week and a half since I attended the screening and that line still resonates with me).

As the closing credits roll, we see British folk singer Steve Tilston talking about the letter John Lennon wrote him – that he received forty years later. It’s a nice touch that closes out Danny Collins on the right note.