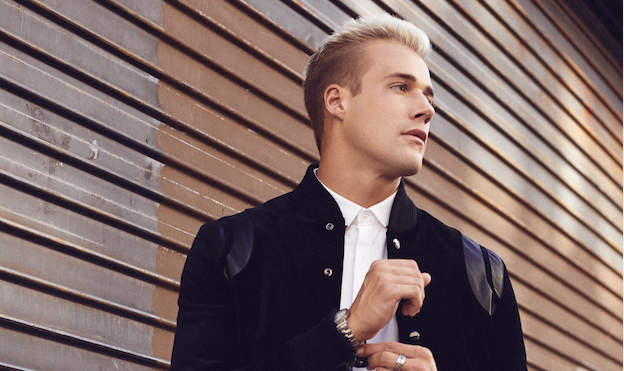 I recently did an email interview with Hunter Clowdus, one of Spencer Jame’s teammates JJ Parker from the hit CW Show All American. Let me just say Hunter’s abs are crazy, he’s like the new Archie Andrews this season, always an excuse to show them off. While I didn’t talk about it much last year, due to my ongoing issues with CW Network, one of my favorite new shows last year was the Network’s All American.

Which  l like to call the black version of 90210 or the real life Serious version of Fresh Prince of Bel Air. It’s about a star football player from the troubled neighborhood of Crenshaw who is recruited to play for Beverly Hills High. It’s full of tasty drama and is a nice, welcome departure from the Supernatural, Super Hero stuff I find myself always watching. It returned for it’s 2nd season and airs Monday nights on The CW Network.

Please tell us who you are?

What’s up!? I am Hunter Clowdus. I am originally from Chattanooga, Tennessee. I moved out to Los Angeles, CA about 7 years ago to pursue this crazy dream of acting and haven’t stopped working hard since. I’m a big believer in going after what you feel in your heart and what you are called to do. Cheers to all you out there with big ambitions.

A while ago, there was a clip on YouTube about a serious Fresh Prince of Bel Air and my response was there is already a show like that called All American. Can you talk about All American and tell us about the show

Absolutely! All American follows the story of Spencer James, a young man struggling with his identity and love of football. He is thrown into the glamorous world Beverly Hills and pursues his football dreams, but is torn between his humble origins in Crenshaw. I am really proud of the unapologetically storytelling taking place.

I think we have been given a special opportunity to shine a light on subjects that are not typically discussed or displayed in the media because they are hard topics. Reality is not always pretty. However, I think so much beauty IS actually found in those times, which is why our fans are loving and supporting the series in an authentic way. The truth resonates.

You look like a football player, have you played ball in real life?

Well thank you! Yes, I actually grew up playing football so it’s deeply rooted in me. I started at the age of eight and played all through high school! I think it is a great team building sport and I am still friends with a lot of my teammates I played with throughout the years. It’s truly a bond that can’t be broken.

I absolutely adored the first season can you tell us what’s in store this year?

So Much more!  We are thrilled to have the opportunity to come back and continue this story because only so much can be told and established in one season. This upcoming season is everything you loved about the first season, but on an entirely different level. This season is filled with surprises. I love the writing so much and with respect to all the writers, I’m just going to leave it there. I honestly leave every table read with my jaw on the floor.

Let’s talk about your character.

JJ PARKER!! I truly could not have more fun with this character. He is an absolute joy to bring to life. I am so proud of how we keep identity and family at the foundation. To elaborate a bit, it’s a story that transcends any character.

Each cast member is humble and easy to work with, and we all just want to be a vessel for the truth in which we are telling. JJ is definitely continuing to have a good time this season and I’m looking forward to seeing just how much trouble he can get in to while escaping serious repercussions.

When doing a show like this, how realistic is the sports aspect? Meaning can you talk a bit about the training routine and if everything is run like a sports program with two a days, playbooks, etc?

The sports aspect is very realistic! We have a great team that coordinates all of our plays and actions down to the formations and blocking schemes. Even the specific play calls and audibles we run on the field are planned. The team has extensive playing experience and it definitely shows when we are shooting a big scene.

As far as the cast goes, we have all kind of taken it upon ourselves to challenge ourselves to do it right and with respect to the game. We have met numerous times outside of a scheduled practice to workout, run routes, and train to become better football players. The sport is something we all love.

Can you talk a bit about your background?

Tennessee born and raised!  I grew up on a farm, playing every sport imaginable, and enjoying the simpler things in life. I earned my first role on “Teen Wolf,” which took me to Atlanta, GA where I briefly lived and further explored the art of acting.

When I worked up the confidence to seek out some bigger opportunities, I packed up my car and drove across the country. The early years were definitely a challenge, but I think when you have a burning desire in your heart for something walking away is harder than pushing through.

What’s next for you?

If you were to ask me that 7 years ago, I would of had a nice little plan, but it’s so important to make room for the unexpected. I think there is so much to be said for hard work and living in the present. Opportunities come at the most unexpected times and I think if we have only have our sights set on one mission, we may miss other things that are right in front of us. While that sounds wildly profound, it is an idea I am trying to practice more often. I do have a handful of professional and personal projects that are in the that push me creatively everyday.