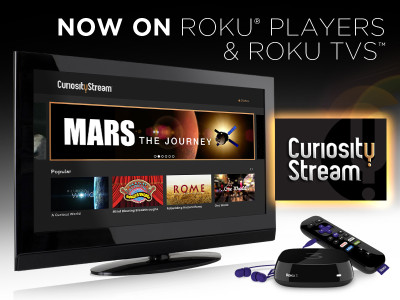 Subscription-based nonfiction streaming service CuriosityStream has launched a Roku® channel. The service provides high-quality programming from the world’s best documentary filmmakers, with an eye to providing entertainment, education and inspiration. Follow the jump for further details.

CuriosityStream Launches Roku Channel
-New Nonfiction Streaming Service Delivers the Best Science, Tech, History and Wildlife Programs from Around the World-
Silver Spring, MD – September 22, 2015 – CuriosityStream, the world’s first ad-free, on-demand nonfiction streaming service, today announced the launch of the new CuriosityStream Channel on Roku® players and Roku TV™ models. CuriosityStream is a subscription-based service that delivers high-quality programming from the world’s best documentary filmmakers. Starting at just $2.99 a month, the service aims to entertain, educate and inspire audiences with original and first-run programming about topics that range from science and nature to history and the arts.
With CuriosityStream‘s new Roku channel, consumers with a fascination for all things science, technology, civilization and the human spirit can watch short-form and hour-long series and specials from the world’s best nonfiction producers, including NHK, BBC, ZED, TerraNoa and PixelDust. CuriosityStream’s 1000+ library of programs includes original series such as A CURIOUS WORLD, DESTINATION: PLUTO, CURIOUS MINDS and exclusive landmark series such as THE NANO REVOLUTION, COSMIC FRONT, AGE OF ROBOTS, TALES OF NATURE, QUARX and BEHIND THE ARTIST. CuriosityStream also produces exclusive, short-form documentaries, including MARS: THE JOURNEY, THE RISE & FALL OF T-REX, OCEAN RESURRECTION and DARK SECRETS OF THE COSMOS.
“Making CuriosityStream available on the Roku platform is an exciting next step in our evolution as a service, captivating curious minds with quality nonfiction programs,” said CuriosityStream president Elizabeth Hendricks North. “Since launching just a few short months ago, our growing media library continues to enchant our subscribers with meaningful documentaries on the topics that matter. We look forward to an equally engaging relationship with millions of Roku customers.”
CuriosityStream is available via a monthly subscription to Roku customers in the U.S. starting today and can be found in the Science & Technology category within the Roku Channel Store.
About CuriosityStream
CuriosityStream is the world’s first ad-free, on-demand streaming service for quality programs that educate, inspire and entertain. CuriosityStream delivers an extensive content library of high-quality documentaries and series from the world’s most accomplished filmmakers.  All shows are available to watch ad-free, anywhere and anytime via multiple mobile apps. Learn more at www.curiositystream.com and join the community of the curious on Twitter @Curiosity_Strm.
Roku is a registered trademark and Roku TV is a trademark of Roku, Inc. in the U.S. and in other countries.
###
← Previous Post
Next Post →