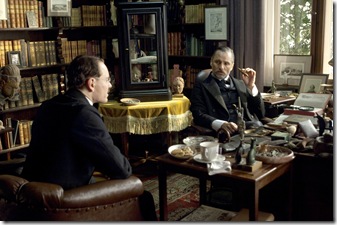 A Dangerous Method turns the debate between Freud [Viggo Mortensen] and Jung [Michael ‘He’s Everywhere’ Fassbinder] as to the direction psychiatry, or The Talking Cure should take into a quietly explosive series of face-offs between the two men – through letters and face-to-face.

Freud’s theory was that all mental ailments were generated by some deeply rooted sexual cause, while Jung thought that might well be case in most, but not all cases and that connected every mental ailment to a sexual root was too limiting. Jung also proposed the possibility of parapsychology – telepathy, telekinesis and the like – though the film only mentions that it passing [it is, however, a particularly striking scene.

The arguments each make in A Dangerous Mind are both fascinating intellectually and emotionally – each man has so much invested in his beliefs.

The interesting thing about A Dangerous Method, though, is that the relationship between Freud and Jung is folded into the story of Jung’s relationship with one of his patients, Sabina Speilrein [Keira Knightley].

The film opens with her being brought to Jung’s office in a state of hysteria. Once he wins her trust, they learn the cause of her problem. Then, through some prodding by a very compelling patient of Freud’s, one Otto Gross [Vincent Cassel], and a pointed declaration from Sabina, he embarks on an affair with her. 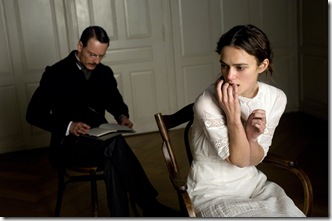 That sounds oh so simple, but the development of the relationship is much more complex and plays into – and off of – Sabina’s psychiatric ailment.

Knightley gives the most forceful physical performance in the film – her hysteria manifests in tics and twitches and massive bodily shaking and jutting jaw – that is riveting and more than a little scary [in interviews, she has said that she had to rein in her performance because no one who hadn’t actually witnessed these behaviors would never believe they could be accurate].

In any case, Sabina becomes an example of Jung’s theory that psychiatric patients can rehabilitated and given the means to move forward with their lives – and their affair, therefore, becomes a major component in the growing rift between him and Jung.

A Dangerous Method shifts between claustrophic [Sabina’s arrival]and intimate [Sabina’s sessions with Jung; Jung’s discussions/debates with Freud]. In the scenes featuring Jung and his wife Emma [Sarah Gadon], there seems to be a mix of both – he is only able to devote so much time to his work because she is wealthy, so that lends itself to claustrophobia, but he also loves her for being the foundation of his home.

Mortensen give his usual fine performance. His Freud believes himself to be open-minded even as he behaves otherwise. Fassbinder, on the other hand, plays the open-minded Jung in a way that suggests he wishes he could be more rigid at times – as when his debates with Gross over the nature of man and the limitations Gross believes we artificially impose on ourselves. Cassel’s Gross is the serpent in Jung’s Eden and he plays the role with seductive relish.

Gadon’s Emma seems like a typical housewife of the period, but shows her true steel when she learns of her husband’s affair.

The screenplay is by Christopher Hampton, adapted from his play, The Talking Cure [which in turn is based on the book A Dangerous Method by John Kerr], A Dangerous Method is perhaps too static to be completely effective once it gets past the physical splash of the dynamic opening sequence with Sabina being dragged into Jung’s offices literally kicking and screaming. But the intensity of the film’s key relationships – and the fascinating ideas and beliefs, expressed so eloquently, make it more entertaining – and edifying – than you might expect.

David Cronenberg does not make boring movies – not even when they’re mostly talk.