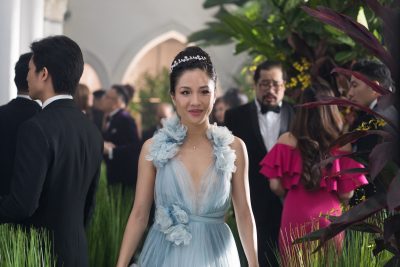 She’s a professor of economics at the University of New York; he seems to be a middle manager (branch manager?) for a company based in his home country of Singapore.

Nick has been asked to be best man for his best friend and so, they’re off to Singapore.

What he hasn’t told her is that his family is filthy stinkin’ well off – as in when he tells her they’re comfortable, she notes that that’s what people who are extremely wealthy say.

This after being ushered to a first-class stateroom on their Air Singapore flight (he explains it as a perk of working for his family’s company).

While Nick takes care of some ‘groomsmen’ business, Rachel visits her old college buddy, Peik Lin Goh (Awkwafina) – or ‘Asian Ellen’ as her dad calls her – who seem to be pretty well off.

Her buddy’s reaction to who she’s engaged to tells her that Nick has way undersold just how ‘comfortable’ his family is.
Cue makeover for the meeting the family…

Initially, Rachel seems to do well – Nick’s grandmother tells her she ‘has an auspicious nose.’ Unfortunately, Nick’s mom, Eleanor (Michelle Yeoh), is positively glacial under her (no doubt practiced) cordial demeanor.

Where the knives really come out, though, is during the bridal shower – where the only woman who isn’t actively attempting to rip her down is the only member of Nick’s family she’d already met, Astrid (Gemma Chan). 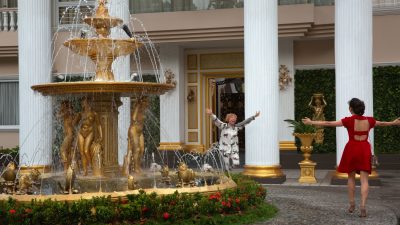 Meanwhile, Nick’s stag party is a monumentally over-the-top bash that features the few Caucasians in cast (background actors all).

So, while Nick and his soon-to-be-married buddy Colin (Chris Pang) are trying to get away from the most overkill stag in history, Rachel is having to deal with the combination of Glacier Mom and every jealous woman at the shower (again, that’s everyone but Astrid) – nastiness that even riffs on a very famous Godfather scene…).

Despite all the crap in her way, Rachel is able to carry on because she loves Nick – and Astrid is a formidable friend who can pick her up dust her off despite having problems in her own life.

For all that Nick is a genuinely good guy – who’s willing to walk away from the family business for Rachel – this is Rachel’s movie.

Even during the most ostentatious wedding ever – and being out of the family row – Rachel finds a way to turn that into a good thing.
But Mama Ice has one more card to play… 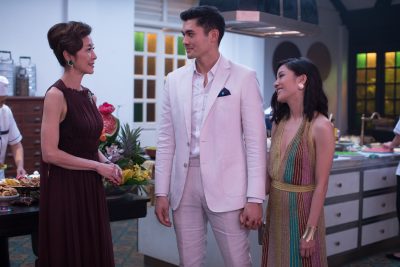 This adaptation of Kevin Kwan’s bestselling novel is scripted by Peter Chiarelli and Adele Lim and directed by Jon M. Chu – who makes its $30 million budget look three times as big.

Chu also pulls off a couple of feats that boggled my mind: the grandly over the top wedding sequence both shows off the ostentation and feels as intimate as a small gathering in the family backyard; the balance of dozens of speaking roles of varying levels of importance (some smaller roles are more pivotal to the story than some of the larger).

Crazy Rich Asians (crazy rich; crazy and rich both apply) is sparkling from start to finish. It’s smart, funny, dramatic and melodramatic in just the right ratio and features an amazing cast (even the smallest roles are brilliantly done).

Wu is perfect as the feisty Asian-America woman who has to win Yeoh’s Eleanor despite not being ‘the same.’ 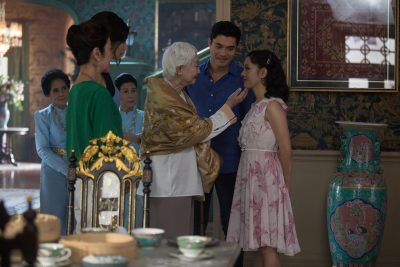 Eleanor’s explanation of why they’re not the same is, in a nutshell, blunt and a kind of discrimination that does, in fact exist. Truth, especially hard truth, is what makes Crazy Rich Asians a unique and dazzling accomplishment.

Another truth: after you see Crazy Rich Asians, you will never again buy the Hollywood excuse that ‘there simply isn’t enough of a pool of available Asian/black/whatever talent.’

If nothing else, Crazy Rich Asians is important for that reason – but it’s also important because it’s a terrific rom-com at a time when rom-coms seem to be losing steam.

I came out of Crazy Rich Asians on a endorphin high. Laughter will do that for you.