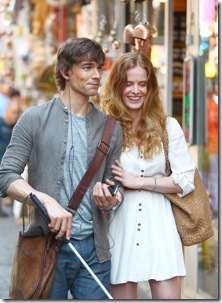 Half A World Away opens with Auggie [Christopher Gorham] attempting to get his baggage stowed away as he prepares to fly to Istanbul for the Istanbul Jazz Festival. He’s talking with Annie [Piper Perabo] on his Bluetooth when the very attractive flight attendant [Rebecca Mader, Lost] asks if he can’t see that his bag isn’t going to fit – then stows it when she realizes that he’s blind. Flirtation ensues.

In Istanbul, Auggie has a friend make a sound board recording for him, with some well placed mikes and, in his hotel, where we also find Franka, the flight attendant, he hears something disturbing during one of the songs. Playing it back, again, he recognizes the voices in a conversation – they’re the men who blinded him!

As the ep continues, we see a side of Auggie we haven‘t seen before – the guy who fought in the war on terror, in Baghdad. We see him playing football on the base with his men, and getting the mission that has its terrible effect on him. The events of the war, and the situation that arises in Istanbul, are, obviously, condensed to emphasize the drama, but they are detailed enough to give us a feel for the pre-sightless Auggie – a good guy in charge of good men – and make the connection between the man that he was and the man that he is now.

Rebecca Mader seems to be having fun as Franka, the flight attendant who stumbles into an adventure and, captivated by Awesome Auggie, decides to go with the flow even though every instinct has to be telling her that this could be dangerous.

Meanwhile, Annie does Auggie a small favor that balloons into something much more complex – involving the FBI – leaving her with no one to turn to besides Joan [Kari Matchett].

With Half A World Away, Covert Affairs achieves the same kind of cool, different episode that reminds of The Man From U.N.C.L.E. when they did episodes that put Illya Kuryakin in the spotlight. The feel is the same, but the perspective – and the humor – has a bit more flair. It helps that that really is Istanbul we see Auggie navigating through.

What really makes the ep special, though, is Gorham’s spirited performance as Auggie. Whether it’s Iraq Auggie or present day Auggie, Gorham makes him a real, well rounded character with whom we can relate [and the pe also serves to remind just how good the sighted Gorham is at playing a blind character…].

As usual, the screener provided lacks credits, but kudos to whomever wrote and directed this ep. Half A World Away flows like a good jazz piece, with each sidetrack and flashback feeling like an improvised theme around the central motif – which would be Auggie’s backstory. And, for those so inclined to appreciate such things, shirtless Auggie will certainly round out the score with paraddiddling heartbeats.

Covert Affairs just seems to get better with every episode. Now if they’d just dump those tacky vocals during the second half of the opening theme music…